Spend under 2 minutes to see the highlights of Beneteau Group’s 2018-19 fiscal year, in which the French builder sold more than 9,800 boats, introduced 32 new models and achieved revenues of €1.14 billion in it’s Boat Division

The Beneteau Group has released its Annual Financial Report for the 2018-19 fiscal year ending 31 August 2019, along with a top-level video summary (above) of key activities during the period emphasizing a year of rapid expansion and significant organisational change for the French boatbuilder.

The company’s snapshot of key figures for it’s Boat Division summarises the builder’s accomplishments and clearly establishes its pole position as world leader in monohull and multihull sailboat production: 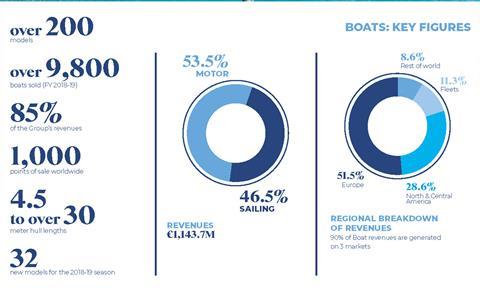 Subscribers to IBI’s Premium Content can read the rest of our summary from Beneteau’s 200-page report by clicking here.