Why we need to celebrate boating’s visionaries

With less than a month to go until the Boat Builder Awards, anticipation is already running higher as we look to celebrate one particular individual’s contribution to our industry 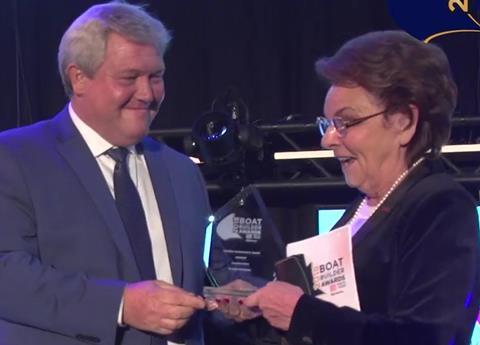 As sponsor of the Boat Builders Lifetime Achievement Award since its inception, Sleipner CEO Ronny Skauen has had the honour of presenting the award to some of the industry’s most notable leaders, including Annette Roux of Beneteau, in 2018.

The Lifetime Achievement award, once again sponsored by Sleipner, has always been a major highlight of the Boat Builder Awards for the past eight years – no other accolade acknowledges the passion and fortitude that drives our industry quite like this award.

Choosing one particular name from what is always a venerable list of key industry figures presents its own challenges and this year was no different – however, a unanimous decision was reached by the judges, and the 2022 recipient will deservedly take their place on an honour roll call that includes the likes of Azimut Benetti’s Paolo Vitelli, Princess’s David King, Beneteau Group’s Annette Roux and Sunseeker’s Robert Braithwaite. 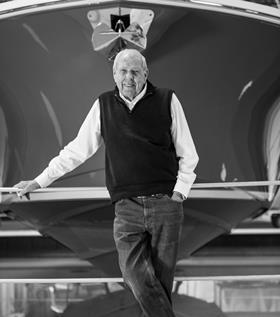 Leon Slikkers,a pioneer in fiberglass boat building, retired in 2020 after 75 years of running the S2-Pursuit-Tiara Yachts business he started.

“Without our father’s vision, passion and unwavering entrepreneurial drive over many decades, this company, its rich history, and all that’s been accomplished would not have been possible,” said Tom Slikkers, President and CEO of Tiara Yachts, accepting the award on his father’s behalf in last year’s Boat Builder Awards. Leon Slikkers, now well into his nineties, only retired from boat building last year, after starting, nurturing and developing the business which continues to flourish as a family-run company. He, along with this year’s and previous winners embodies the very best of our community. 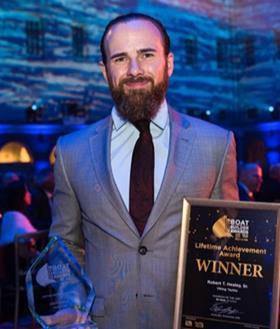 Robert Healey Jr. accepted the 2019 award on behalf of his father an uncle Bob and Bill Healey

In the last year or so, two recent recipients have passed - Bob Healey, founder of Viking Yachts in the US, and Hallberg Rassy co-founder, Christoph Rassy. Healey’s award, jointly presented to him and his brother Bill, was accepted by his son Robert Healey Jr in the last pre-Covid BBA celebration at the Maritime Museum back in 2019. Robert thanked the audience that night on behalf of both his father and uncle and the hundreds of employees that made such a significant contribution to the company’s success over the years.

In 2020, the highlight of a special virtual Boat Builder Awards, was the acceptance of the LTA accolade by a visibly moved Christoph Rassy as he recounted with modest pride, how he felt having travelled the world to discover just how respected the Hallberg Rassy brand had become.

Collaboration and team work are rightly championed by industry and these awards, but the Lifetime Achievement Award justly celebrates those individual inspires. In the words of Leon Slikkers; ”I had a vision… I think you live that vision and radiate that vision to other people.”

The Boat Builder Awards, held in association with Raymarine, will recognise another industry visionary in a month’s time in the finale to a gala dinner at the beautiful National Maritime Museum in Amsterdam. Make sure you’re part of it.

The awards evening culminates with the much-anticipated Lifetime Achievement Award, presented in the previous seven years to:

Tickets to the Boat Builder Awards are now on sale with the option to purchase individually or in tables of 10 to enjoy an unforgettable evening with colleagues and industry contacts under the starlit canopy of Amsterdam’s National Maritime Museum:

All tickets cover admission to the event at the Maritime Museum including: a spectactular cruise through Amsterdam’s scenic canals, welcome drinks, gala dinner, entertainment, the awards ceremony & after-dinner party.

All tickets cover admission to the event at the Maritime Museum including:
a spectactular cruise through Amsterdam's scenic canals,
welcome drinks, gala dinner, entertainment,
the awards ceremony & after-dinner party.