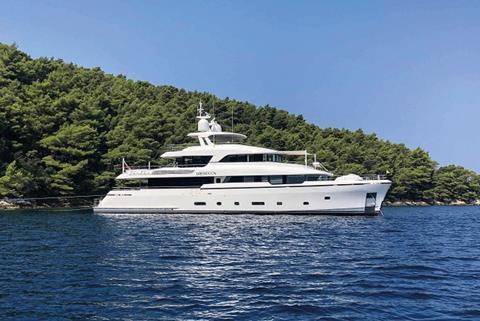 The 36m Brigadoon, winner of a 2018 World Superyacht Award

“At this moment we are close to entering a new era,” Moonen Yachts CEO Johan Dubbelman said in a statement. ”A new investor has been found [and it is] to be expected final decisions will be taken within the next few weeks,” he added.

Dubbelman did not identify the new investor. IBI understands he is talking with an Australian investor.

Dubbelman expressed confidence the new investor would boost production of Moonen’s steel yachts from 30m-50m. The yard aims to spec-build at least two to three yachts per year to shorten delivery times.

AHMSA’s troubled finances are not new. In 2015, it briefly denied funds to Moonen when world steel prices tanked. AHMSA’s accounts were frozen last May when its chairman, Alonso Ancira Elizondo, was arrested in Spain on bribery charges.

In recent years, Moonen has delivered several yachts, including the 36m Brigadoon, winner of a 2018 World Superyacht Award. When it went under, Moonen was building a sister ship due for launch next spring.

Moonen was founded in 1963. Since 1999 it has built some two dozen superyachts.