UK yard now fully back at work and hiring again 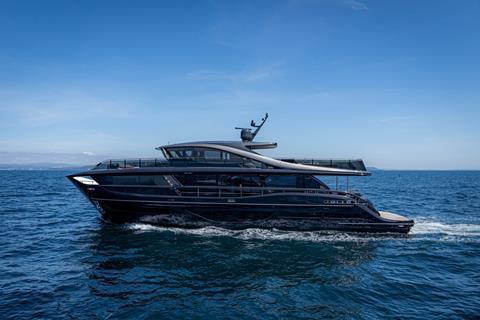 In its first-ever virtual press event, the UK’s Princess Yachts shared a sneak presentation of its new X95 ‘Superfly’ model on Thursday with a group of some 25 international yachting journalists. Besides the X95, the company’s position in the light of Covid-19, new models (including an X80), and other new developments were also discussed.

The press event will be followed by a Facebook Live presentation on the X95 on July 27 from 14.00-17.00 BST. As of yesterday, some 3,500 people had signed up to participate and over 1.1 million people had viewed the announcement.

For Princess, the X95 is already on its way to being a success. To date, the builder has sold nine X95s off-plan with negotiations for the 10th model underway. CEO Antony Sheriff commented: “Interest in the X95 has been global with sales to the US, Europe and Asia as well as a potential buyer from the Middle East. We have interest from pretty much everywhere.”

The X95 is seen by Princess as “establishing a new class of yacht on the water” which “boldly re-writes the rules of yacht design” plus “reimaging the concept of a flybridge with extensive outdoor space”.

The volume on the X95 is equivalent to the space on Princess’s 35m (115ft) ‘M’ class superyacht. The design of the X95 is the result of collaboration between the company’s own design studio plus its long-standing naval architect Bernard Olesinski and the iconic Italian design house Pininfarina.

The model has a totally new hull design in partnership with Olesinski which evolves the deep-V concept to provide 15% improved efficiency with outstanding stability.

With the wave-piercing hull and the efficiency it provides, at a cruising speed of 10kt the X95 has a cruising range of some 2,000Nm. Its top speed is over 23kt.

During the presentation, Sheriff, marketing director Kiran Haslam, sales director Will Green, and designer Andy Lawrence all emphasised the flexibility that the X95 offers in terms of different guest/family options for relaxing, entertaining and socialising. Also, the X95 can be driven by the owner if so desired. Of the nine units that have been sold, the on-board space is be used in a variety of ways. The point was also strongly made that the X95, while different in design, retains features of the Princess DNA.

Looking ahead to the return of shows, the X95 will not be at Cannes and Haslam indicated that the exact models that will be at upcoming shows will be made known in due course. “We have a good relationship with all the show organisers and are working with them on what our participation will be.”

Sheriff described the commercial result of Covid-19 as “astonishing”. During March and April, the order intake was about 50% of the usual rate, but May saw an improvement and June, he said, has been the best retail June on record with July following a similar path. In total, in the March to July period, between 80-90 boats have been sold.

“The order book is full for 18 months across all models and for some it extends to the summer of 2022 or beyond,” Sheriff said.

In respect of Covid-19, Sheriff said he was proud of the way Princess Yachts had coped with the pandemic, mentioning the company’s resilience and velocity in addressing changes to cope with the challenges presented. Covid-19 resulted in a complete shutdown of production from mid-March to mid-May and the placement of 2,900 out of the 3,000 workforce being part of the UK government’s furlough scheme.

The virus caused much work to be done to completely change the production procedures to account for social distancing and to have a limited number of people on a boat at any one time. The company moved to a two-shift system to reduce the density of people, one-way routes were introduced, and sanitisation stations installed.

From towards the end of April, a phased restart of production was commenced and since mid-May Princess has been working at 100% full production. The priority since then has been the safety and wellbeing of the workforce, suppliers, dealers and others.

With few exceptions, all of the workforce has now returned with a few due back in August and Sheriff referred to the company now being back to the point where it is hiring people again.