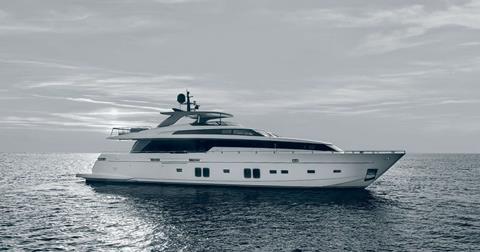 Maritta S was built by Sanlorenzo SpA in 2016

Sanlorenzo Spain, the exclusive agent for Sanlorenzo in Spain and the Balearic Islands, has sold its fifth pre-owned Sanlorenzo yacht above 24m since the start of 2019. The sale of the 32.2m Sanlorenzo SL106-634 Maritta S follows the sales of Y4H, I, Zulu and India earlier this year.

Monaco-based brokerage Monte Carlo Boat Sales represented the seller of Maritta S, while Sanlorenzo Spain represented the buyer. The yacht was built in GRP by Sanlorenzo SpA in 2016 with exterior styling by Francesco Paszkowski. It is the 19th hull of the Sanlorenzo SL106 model, of which over 30 units have been built and delivered to date.

Powered by twin MTU 16V2000M93 2,435hp engines, Maritta S is capable of achieving a top speed of 29kt and is fitted with a zero speed stabilisation system.

Maritta S features a bespoke five-cabin layout accommodating up to eight guests. A spacious master stateroom is located on her main deck, in addition to a VIP cabin and two double guest cabins on the lower deck. The yacht also features additional crew accommodation for up to four crew members across three cabins.