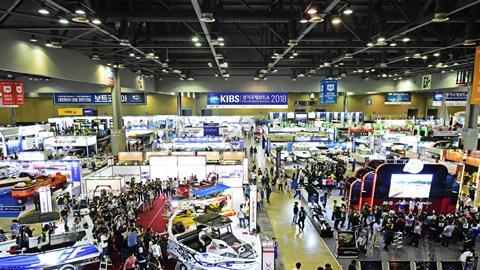 According to the organisers, KIBS, after 12 years, is now one of Asia’s leading boat shows alongside the Singapore, Taiwan and Shanghai events.

Last year’s show, attended by IBI’s Asia correspondent, revealed an increasing interest in leisure boating as more serious buyers visited the show. The number of leisure boats in the country has risen by 15% per annum over the last 5 years – the highest rate of growth in leisure boat numbers in Asia, according to the show organisers. The total number of registered leisure boats stands at 31,145, according to figures released during an Industry/Government round table forum on the first day of the show last year. The total includes 19,922 motorboats, 6,928 PWC, 3,472 Inflatable boats with just under 1,000 sailing boats. These figures will be updated this year at a similar forum planned for the opening day on May 9 which IBI will attend. Growth in the Korean market has been assisted by Government and Province support over the last 10 years. According to government statistics and reports there is a large program of marina developments around the 12,000km coastline with 58 marinas programmed to be built with some 19 already operational.

At the KINTEX exhibition hall this year 241 marine leisure companies have taken 1,546 booths related to sailing yachts, power boats, water sports, marine equipment, and diving. The on-water display at the Gimpo Ara-Marina will offer a variety of marine leisure experiences as well as 20 larger yachts and boats.

Domestic Korean boat manufacturers will introduce their new products at the Made in Korea section of the show which is an exhibition area of 500 booths. There will also be a new workboat section which will promote passenger, marine tourism and patrol boats for which there is a substantial market in Korea and Asia.

More than 300 buyers from more than 20 countries are expected to attend KIBS to participate in a business matching program with domestic manufacturers.

A variety of other events are also being organised for show visitors interested in marine leisure and for professional users using work boats.

Dr. C H Kim, general manager of the KIBS said; “Korea International Boat Show is the main promotional channel for Korea’s marine leisure industry. This year’s KIBS will be the trigger for domestic marine companies to promote their products to the overseas markets as well as the domestic one”.