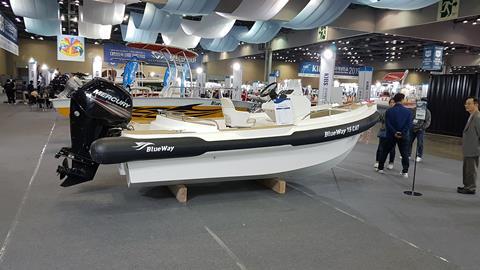 The 12th Korea International Boat Show (KIBS) concluded last Sunday with exhibitors generally happy about the quality of visitors, bucking a slowing economy and reduced boat sales over the past two years. The latest leisure boat registration figures show that 3,522 boats were registered in 2017, down from 4,863 in 2016. However, 21,596 new leisure boat drivers’ licenses were issued in 2017 – an increase over the 2016 figure of 16,511, raising speculation in industry circles about the high number of unregistered leisure boats in the market.

The organisers of KIBS – the Korean National Exhibition Centre and KOTRA, the Korean government trade promotion organisation – reconfigured the layout of this year’s show by opening up space for smaller boat manufacturers without the additional costs of expensive stand construction. This resulted in some 40 boat exhibits by smaller builders who would not otherwise exhibit, compensating for the lack of larger overseas boat brands such as Beneteau, Princess and Sunseeker.

Some larger boats were present, howerever, at the on-water show located 15 minutes away at Ara Marina. A tightening economy over the past two years has reduced consumer spending power somewhat for high-end leisure products and is cited by local industry experts as a key reason for a market slowdown with larger leisure boats.

A noticeable trend was the growth in electric-powered boat propulsion systems on offer, both outboards and inboard installations.

Hyundai SeasAll’s international operations director, Edwin Lim, described the advantages of the new engine system to IBI at KIBS. “Our new concept diesel outboard model S30-OB offers the advantage of simplicity, safety, robustness and fuel economy that comes with a diesel engine over petrol installations,” he said. “This is particularly applicable to the workboat market, where we have already tested our concept. The engine and drive comes as a complete unit ready to be fitted onto the boat’s transom and uniquely, compared to conventional outboards, the pod provides buoyancy to support the weight of the engine and transmission. The whole pod unit can also be adjusted for trim under way using hydraulic rams to give an engine installation that features the simplicity and reliability of shaft drive systems with a trim facility to optimise the boat’s performance.”

The KIBS organisers announced that the show will, in March 2020, combine with an existing fishing show in order to leverage on the eight million active participants in sea fishing who are increasingly interested in purchasing their own boat for fishing. Sea fishing is extremely popular in Korea. A weekend visit during the boat show by IBI’s Asia correspondent to the coastal marina at Jeongok Port revealed strong growth over previous years in trailer-mounted boats used for fishing and Island hopping with packed trailer parks and slipways. The joining of the two shows is expected to nearly double the show size in 2020.

A more detailed report on the Korea market and this year’s KIBS will feature in the June/July issue of IBI magazine.