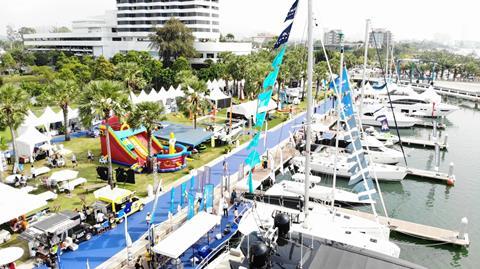 The 8th edition of the Ocean Marina Pattaya Boat Show, located at the Ocean Marina venue in Pattaya on Thailand’s east coast, is scheduled to take place from November 21 this year. According to the show organisers, Ocean Property Co, the event is expected to give the Thai marine tourism industry a boost after tourism numbers in the country recently dropped. Marine tourism is an important part of an industry that is scheduled to bring in 40 million international visitors this year.

“Ocean Marine Pattaya Boat Show is one of our signature marine events and has grown considerably since its launch in 2012,” says Napong Paripontpochanapisuti, managing director of the organisers. “Visitors reached almost 6,000 last year, a 5% growth on the previous year, while we are targeting an increase of visitors of 20% for this year. We invest more than 10 million baht (US$330,000) each year in developing and marketing the show in Thailand and also in overseas promotion. Our aim for the show is for it to become a platform for marine-related businesses and services, especially the yachting tourism of the stunning east coat of Thailand.

Scott Finsten, Harbour Master at the Ocean Marina Yacht Club show venue, is enthusiastic about the growth of yachting tourism on the east coast. “This year is the eighth consecutive year we have organised the show,” he says. “The event will take place November 21-24 and will have onshore and in-water displays. The exhibitor area is similar to last year though we have expanded the in-water space and can now welcome up to 40 boats in-the-water at the show. The major change onshore is the roofed areas. This year we will have a single large tent that will be home to most of the onshore booths and displays. There is also outdoor space for those exhibitors who wish to create unique exhibits, but the large roofed area will be home to a diverse range of displays. Being all under one roof is good for exhibitors and makes it more convenient for visitors.”

Talking about the Thai market and developments in the marina, Finsten continued: “With its proximity to Bangkok, more Thai people are spending their vacation time on the east coast and are starting to be tempted by the boating lifestyle with 70% of the visitors at the 2018 show being Thai, while in the marina 45% of the boats are Thai owned. Yachting tourism on the east coast is starting from a low base, but we have a lot of potential for growth, something that we are focussed on developing. After a number of expansions over the last eight or nine years the marina is now full in terms of size in-the-water. We can accommodate 450 boats, making us the largest marina in South East Asia.”

Since its opening in 1995, Ocean Marina has contributed to the reduction of yacht importation duty to 0%, and is currently one of the largest marinas in Southeast Asia. Completely protected by a 1.5 km-long wave breaker, the marina currently provides 450 floating marina berths capable of accommodating yachts up to 200ft. Currently, the marina has further plans for expansion to cater to the ever-growing demand for yachting.

Located in Na Jomtien, Ocean Marina Yacht Club is 90 minutes’ drive from Bangkok’s Suvarnabhumi International Airport, with access to some of the most spectacular and underrated islands in the Gulf of Thailand.