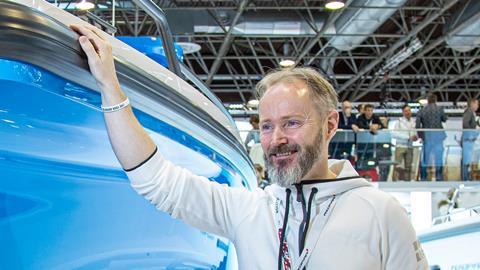 Finnish brand Axopar is revolutionising the boat business by adopting a ‘platform’ approach to model development. Debuting five new models at Düsseldorf in January, the builder has sold over 2,200 boats to date in more than 70 countries with another 500-plus on order. Its co-founder Jan-Erik Viitala talks to the IBI about building the brand into an €80m-plus business this year and the secret to its success

Q. How does the year ahead look?

I’m really looking forward to 2020. We launched the new 37 on Saturday (the beginning of Düsseldorf boat show) and we had 100 signed customer orders even before the launch, thanks to our pre-marketing. We’ve been working closely with Mercury and Simrad on user-interfacing. We want to improve the intuitive functionality of the boats for our owners to help them become better boaters. We introduced our Axopar user interface to make boating easier and less intimidating for beginners. We have a clean helm and glass bridge project 1.0 and will have a 2.0 version ready for Cannes. 3.0 is already in our heads! It’s not just about a touch screen. We want a system that can educate and control the boat in a much deeper way than is currently available – make it much more like driving a car.

Q. How is the Axopar market evolving?

We’ve seen two big developments: the boat is increasingly being picked for charter – they have the right price point, usability and driver friendliness to make a good charter platform. They’re being used as VIP transfers for instance between luxury resorts. We’re also seeing them being used more and more as tenders – particularly in the 40m-50m superyacht sail sector. The Shadows are also being used by the owners on big superyachts – it’s a boat they can escape on with family and guests as they’re easy and fun to handle.

Q. What about your eco footprint?

We want to make a boat that has a very long lifespan. It’s easily repairable, useable after thousands of hours and still looks modern. We’ve really pushed the efficiencies of the hulls – the stepped hull is greener as lighter and you use less material – a new 37 with the latest Mercury V8s has up to 25% lower fuel consumption compared to the old 37 with Mercury L6s. Electric power is not viable at the moment, but we’re monitoring it.

Q. Will you be increasing production?

Today we’re building around 700 boats annually, thanks to the addition of a second OEM in northern Poland recently that’s enabled us to build an extra five 28s a week, and within the next six months from now, another five 37s a week. The 37 is key to the business model. It hits a sweet spot, with the same margins as the 28. It’s the product that’s enabled the company to grow. It’s also the right product to take outside of Europe where anything under 35ft is considered small. It can tackle oceans which is why Florida is by far our most successful sales region. Increasing our footprint in the US is where the major potential lies. Ultimately the goal is to build 1,000 boats a year, that would be a nice milestone.

Q. Will you be expanding the range from the current three lines and nine models?

We will refresh the 24ft soon and there will be a completely new product, the 45, which is already in the pipeline for a 2021 launch, but we don’t have plans to expand the range as such as the business model is based around platform thinking. We developed the 37, 28 and 24 platforms that we’re constantly renewing, instead of trying to make a uniform fleet like most other boatbuilders.

”On paper it’s simple, but in reality, the product development is horrific.”

We think of ourselves more like BMW, which has a 1,2,3,4,5,6,7,8 series that it refreshes line by line every few years, without having to create a whole new family of cars in one go which would be financial suicide. A lot of boatbuilders are going to the wall because they build say a 28, then develop a 32 which they make look the same, and then a 38, 42 and so on, all designed to look like a family. The problem is by the time you’re launching your 42-footer it’s based on a platform, look and layout that’s already 5-7 years old. Then, when they do launch a radical, modern look, they find customers suddenly want the new look, so they have the mammoth job and cost of renewing an entire fleet.

To continue the car analogy, at the moment Axopar has say an Audi and a Porsche – is there room for a Bentley and VW on the platform, perhaps yes. On paper it’s simple, but in reality, the product development is horrific. There are so many variables you need to consider for the long term. The number one challenge was the hydrodynamics – the power versus weight. We’re getting the hang of it now – it never gets easy doing platform thinking, but you learn to think smarter.