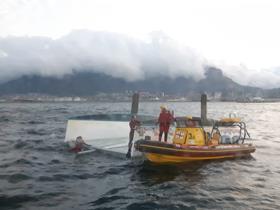 A senior South African politician has questioned whether a breach of safety protocol led to the catamaran accident in Table Bay on Monday involving five British tourists and three local crew.

No lives were lost but one of the tourists was plucked from beneath the upturned 39ft leisure catamaran during a dramatic rescue, it emerged on Tuesday.

Beverley Schäfer, Western Cape Minister of Economic Opportunities, called on investigators to look specifically at safety protocols “so that we are assured that all standard operating procedures and safety precautions were undertaken during the trip,” she said in a statement.

“I am grateful that there was no loss of life in this incident, and that the National Sea Rescue Institute found everyone wearing lifejackets. However, we need to be assured that all safety protocols were in place,” Schäfer said.

“As we enter the busy tourist season, it’s imperative that all of our visitors are safe. We appeal to tour operators to ensure all safety measures are in place.”

The incident occurred near the entrance to the Port of Cape Town in windy conditions shortly before sunset on Monday evening. One of the tourists suffered a fractured shoulder and the others were treated for bruises and hypothermia.

“It has emerged that the one female had been below decks when the catamaran capsized and she was trapped in the galley where water was rising as the cabin filled with water causing a fast diminishing air pocket that had provided some relief,” the NSRI said in a statement on Tuesday. “From what we understand we believe that the skipper of the catamaran had free dived under the catamaran after she capsized and he was able to bring the mom out from below decks.

“The skipper of the catamaran is commended for this effort,” the NSRI said.

Sobantu Tilayi, executive head of the South African Maritime Safety Authority (SAMSA), on Tuesday said the organisation would report back on the cause of the accident as soon as possible. Said Tilayi: “Fortunately there was no loss of life, but SAMSA is always concerned when something like this occurs. Our investigators will be talking to everyone concerned to ensure we avoid a repeat.”

In the meantime, the upturned Escape Cat has been secured on a three-anchor spread outside Cape Town Port’s outer breakwater, SAMSA confirmed.