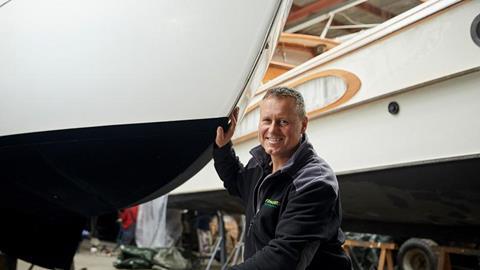 Antifouling fibre wrap that prevents the growth of algae, barnacles and mussels on boat hulls

Rik Breur of the Netherlands has won a European Inventor Award for his Finsulate antifouling fibre wrap that prevents the growth of algae, barnacles and mussels on boat hulls.

Finsulate is a fibre coating that mimics the sea urchin. The thin, carpet-like material sits on an adhesive substrate that easily attaches to hulls. It is covered by tiny nylon spines that act as a natural repellent. Using ‘electrostatic flocking,’ Breur made the fibre spines stand on end to prevent hull fouling.

“Over years of evolution, nature has already solved all kinds of things that we humans can learn from,” says Breur.

Algae and other sea life attach to ships, yachts, tankers and inland water boats creating drag in the water.

This slows down vessels and increases the need for fuel. Traditional antifouling paints release toxins and copper into the water, placing marine ecosystems at risk. Biofouling is estimated to cost the global shipping industry €20 billion annually.

Having won the patent award enables Breur to market ‘Finsulate’ around the world. His client base now spans five continents. “Finsulate products are suitable for all circumstances worldwide, whether you are moored or sailing,” says Breur.