Italian yacht builder Absolute has reported a considerable expansion in production and sales over the past year. Speaking at a press conference Cesare Mastroianni, president of Absolute of the Americas, said that the company had experienced an overall growth of 18% on a year by year basis, resulting in a 13.4% increase in the turnover for the company. This rise came with a 4% increase in the number of yachts that were sold but Mastroianni said that whilst the increase in numbers was small the average size of the yachts sold was larger. 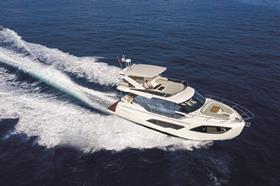 Absolute Yachts has made a significant number of sales into the American market and this sector now accounts for around 30% of the overall sales for the company. The EU is still the largest market, accounting for 45% of the sales but the company was expanding sales into the rest of the world with the SE Asia area seeing an uplift in sales.

Key to Absolute’s growth is its ‘Integrated Structural System’ (ISS) manufacturing system – a construction process that integrates various, previously disjointed parts of the build process – that wowed judges at last year’s Boat Builder Awards, held in association with Raymarine in Amsterdam in November. The system picked up the ’Innovation in a Production Process’ award, sponsored by Dometic, and its new 47 Fly and the Navetta 68, launched last week at Cannes, are the latest models to bear the hallmarks of the build technique.

“The ‘simple’ ISS concept offers to our architects and engineers the right key to understand each new project,” explained, Cesare Mastroianni. “The specialized work team (hull and navigation, structures, mechanic and hydraulic systems, electronic, electrotechnics) work closely with the creative team (external layout, furniture, general layout of the internal spaces, deco), from the verybeginning of each project–the ISS frame offers a meticulous and optimized context for two valuable aims: on one side, to keep an eye on the project’s development and ensure its efficiency considering the set schedule, and on the other side, toensure the viability and the optimization of the manufacturing of such projects. We can boast that starting from unit #1, each new range is exactly as it should be, without any doubts, uncertainties, without the need of having a ‘zero’ unit or a prototype.” 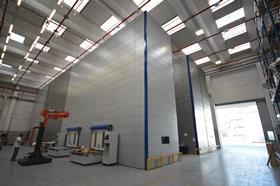 According to Mastroianni, the benefits of ISS are there for all to see in the two latest launches. “You can see it in the robustness of the models, combined with a lightness that comes from the copious amounts of glass and the reduction in the number of steps and stairs… a great use of sliding doors, the highest level thermal and noise insulation, along with pinpoint accuracy when it comes to the assembling and positioning of all the technical equipment on board.”

Optimising the production process has led to parallel advantages, he says, born out notably by the fact that the builder was able to launch the 47 Fly and Navetta 68 while retiring only one (the Absolute 45 Fly). Current production lines have also been enhanced, with additional units being added to each model line, resulting in a 10% increase in production volume for the builder in 2019. 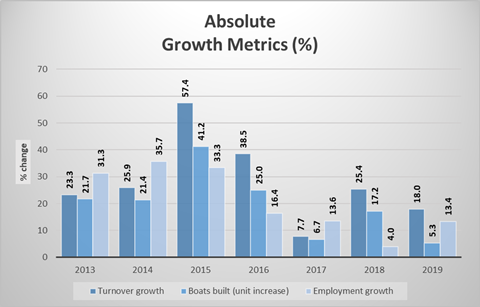 In 2018 the company expanded it modern building facility at Podenzano, north of Genoa in Italy. Since then it has expanded its lamination and structures department; bodywork and assembly departments have also been doubled, while its ‘vertical’ warehouse has been tripled in size. The investments have necessarily led to an increase in headcount.

Absolute has one of the widest ranges of yachts from any builder and these are divided into four ranges, Flybridge, Sport Line, Sport Yacht and Navetta. The latest addition to the Navetta range, the 68, had its World premier in July and the company has announced that a Navetta 64 will be launched next year which will complete the planned Navetta range.

A new 47 Flybridge was launched alongside the Navetta 68 and the company is planning two new additions to the Flybridge range next year as it continues to expand it range of yachts on offer.

In terms of worldwide turnover generation the following figures were presented:

Speaking to IBI about the importance of awards highlighting the ’back room’ work done by builders like Absolute that are continually refining their craft and moving the art of boatbuilding forward, Julien Le Feuvre, Head of Marine OEM – EMEA, Dometic, the firm that has sponsored the ’Innovation in a Production Process’ award category for a number of years, said: “Innovation and creative thinking have been deeply ingrained values for our company over decades, qualities that continue to be prioritised in the development of all Dometic’s new products and equipment. It is fitting, therefore, that we are committing our support for the fourth year to the Boat Builder Awards and the Innovation in a Production Process category. As an award-winning company ourselves, we realise that it is important for the future of the industry to provide a platform for the people and businesses that are harnessing a forward-thinking culture to design exciting new products and processes to benefit boat building production. We are looking forward to meeting the leading companies at this year’s ceremony.”

Want to see your company as a contender for the 2019 Boat Builder Awards?

If your company or a boatbuilder you work with deserves recognition for creative thinking in the production process, let us know.