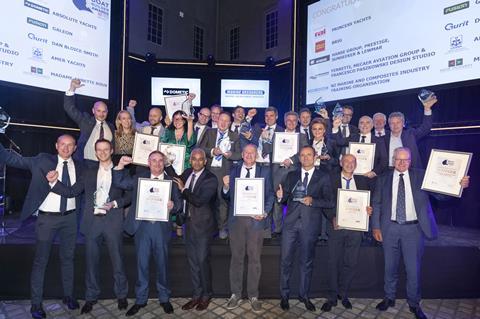 A record total of 15 winning companies and individuals, plus 12 honourable mentions, were announced last night at the 2018 Boat Builder Awards for Business Achievement, held in association with Raymarine. In a fitting finale for the evening, more than 350 guests witnessed an evening celebrating the industry’s many successes at Amsterdam’s National Maritime Museum, crowned by the popular Lifetime Achievement Award to Groupe Beneteau’s Annette Roux.

This fourth edition of the Boat Builder Awards received a broad field of entries from five continents and several of the categories were closely contested. The judges could immediately see the influence of emerging trends in the Retail Marketing Initiative category, sponsored by RAI Amsterdam. Princess Yachts’ Japanese Anime and Manga-style TV and print commercials and leaked prototype boat campaign for the R35 was named winner, while Groupe Beneteau’s Band of Boats community services platform and Brunswick Marine’s Quicksilver Rental Platform also impressed the judges for their response to future pay-and-play demand and were named as Honourable Mentions.

International Dealer or Distributor Development, sponsored by Lumishore, saw Brig named as winner for the rapid expansion of its US dealer market and targeting of new segments there. Sea Ray took an Honourable Mention for its Dealer Development Program that brings automotive-style quality control to its EMEA dealer network.

The Collaborative Solution Between a Production Boat Builder and its Supply Chain Partner category, sponsored by Ultraflex, was once again closely contested by many entries. In their final decision, the judges were drawn to the common theme of three boatbuilders, Hanse Group, Prestige Yachts and Sunseeker, that had each separately collaborated closely with Lewmar on glazing solutions and all four were named winners. Honourable Mentions were awarded to Solaris Yachts with Sailectron for a very well-integrated solar system and Axopar Boats with BRABUS for its collaborative joint brand and manufacturing initiatives.

A new category for 2018, the Collaborative Solution between a Superyacht Builder and its Supply Chain Partner, sponsored by Lumishore, was awarded to Ferretti for its large lifting and sliding aft door, working in collaboration with Francesco Paszkowski Design Studio and Mecaer Aviation Group. Benetti’s pitch and roll stabilisation collaboration with Naiad received an Honourable Mention.

The Innovative Onboard Design Solution category, sponsored by Fusion, threw the judges another challenge with no less than three shortlisted entries approaching foiling technology in new and exciting ways. However, the final decision went to Galeon for brilliantly social layouts with opening forward doors on its 640 FLY and 650 SKYDECK models. Mastercraft took an Honourable Mention for its innovative fast fill and easily trimmed ballast system.

Innovation in a Production Process, sponsored by Dometic, was presented to Absolute Yachts for its Integrated Structure System lean manufacturing processes. Amer Yachts took the Environmental Initiative, sponsored by UCINA, for its Amer 94 sustainable superyacht, while Discovery Yachts received an Honourable Mention for a Southerly 480 built for ocean exploration work fitted with Integrel generator replacement technology.

The Best Apprenticeship or Training Scheme category, sponsored by Marine Resources, had as many as five highly ranked entries that could have taken honours, with encouraging initiatives globally to address skills shortages. In the end the judges decided to name the NZ Marine and Composites Industry Training Organisation’s apprentice scheme as winner, with Princess Yachts’ modern apprentice scheme given an Honourable Mention.

The much-anticipated announcement of the Rising Star category, sponsored by Gurit, revealed a very worthy inaugural of this new award. Dan Bloice-Smith has been involved in launching 16 new models for Williams Jet Tenders in eight years and his achievements were warmly greeted by the audience. 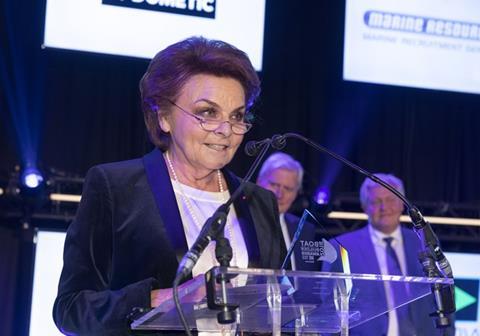 The final act of the evening was to honour five decades of standout leadership and service to Groupe Beneteau and to the wider marine industry by Annette Roux. She commenced her career enthralled by the scent of fresh wood and hemp in a traditional boatyard and today is still actively involved in what she has grown into a hugely successful multi-national group of boat builders. Her Lifetime Achievement award was presented byIBI’s Publishing Director, Nick Hopkinson, and category sponsor, Ronny Skauen of Side-Power.

IBI editor and chair of the Boat Builder Awards judges, Ed Slack, commented: “The Boat Builder Awards provides the perfect opportunity to celebrate the successes and achievements of this critical part of the marine industry and its supply chain. The judging process this year was particularly challenging due to the number of impressive initiatives that we were asked to assess, many of them demonstrating that there are positive changes happening now to address the changing nature of tomorrow’s market. If what we have seen this year is indicative, then the industry has good reason to feel positive about its ability to innovate and grow in new and exciting ways, even as the world changes around us.”