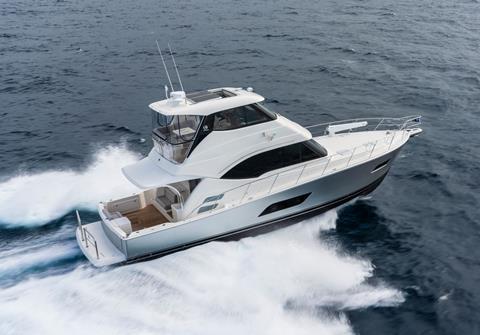 Three of the four models were upgraded versions of the Riviera Sports Yachts series, which have transformed into the Platinum Edition.

Included in the new Platinum Edition range are the 4800, 5400 and 6000 Sport Yachts, which have each been given an enhanced interior fit-out to take them to the next level. The fit-out provides a more elegant and luxury presentation of the yacht. Rodney Longhurst, Riviera’s owner, hinted that another model for the series is in development.

He commented: “It is a wonderful celebration of the inspired and time-proven design of our Sport Yacht range around the world. Over the past 14 years, Riviera has launched over 560 Sport Yachts. With the Platinum Edition Sport Yachts, you will see the unmistakable addition of hardtops and targa arches presented in Riviera Platinum Silver, along with a silver/grey upholstered sunbed on the foredeck. Electronic arrays, air vents and boot tops are rendered in a stealth-like black finish.”

Longhurst concluded: “We are very proud to premiere these three extraordinary Sports Yachts at Sanctuary Cove. Our brand is synonymous with ultra-luxury, superior design, and supreme blue-water sea-keeping capabilities, and these new motoryachts, with their distinguished bloodline, will continue to advance our global standing.”

The other new model premiered at SCIBS 2019 was the 54 Enclosed Flybridge. This model is suited to Riviera owners who want to extend their cruising time aboard in complete comfort and safety, offering the hallmark indoor/outdoor lifestyle features, practicality of design, and offshore capabilities for which Riviera is globally known.

The new 54 replaces the Riviera 52 to partner the successful 57 Enclosed Flybridge model. The 54 continues the heritage of the Riviera flybridge design over the past four decades, which has seen the launching of more than 3,500 yachts.

“Taking centre stage in the 54 is a presidential-style full-beam master suite with an enormous amount of space and storage, king-sized bed, large hanging wardrobe and finely appointed ensuite bathroom forward on the port side,” said Longhurst. “Being located amidships, this stateroom enjoys maximum stability and quietness, while the unimpeded views from generous topside windows are straight from the Discovery channel.”

“The sports motoryacht philosophy has been well embraced the world over, with over 20 yachts purchased by owners in Europe, the Americas, New Zealand and Australia over the past 18 months,” Longhurst says. “The 64 is sure to be welcomed, with a number of orders already received ahead of its official announcement.”

In regards to the Belize brand, which includes the 54 and 66 models, some 30 of these have been sold. A new Daydream model of the 54 will have its world premiere at Ft Lauderdale this year.