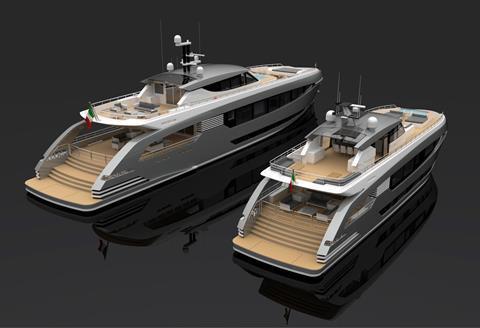 The exterior of the Montecristo 43 and 30 is pure Spadolini

Italian designer Tomasso Spadolini has released details of an all-new, all-aluminium series of pocket superyachts – the Montecristo 30 and Montecristo 43.

The two motor cruisers draw on Spadolini’s 40 years as a yacht designer, as well as feedback from his international clients.

“The 30m and 43m represent the smallest and largest in an expandable series that meets the modern needs of the market,” says Spadolini. “It made sense to start with these as the styling and layout can be easily adapted to create models in between with the same design DNA.”

The exterior design is pure Spadolini. Certain features like the air-intake grilles, dark strip glazing and vertical bow, bear a strong family resemblance to other of his designs, such as 48m Aslec 4 built by Rossinavi.

The elegant arches that connect the main and upper decks aft, on the other hand, are reminiscent of 27m Freedom built by CNN. But these styling motifs have been combined with new solutions to create something different.

“Clients today expect outstanding liveability, both inside and outside,” says the designer. “So, from the start I decided a distinguishing feature of the series should be a widebody main deck to maximise the interior space. Another request is that they want to be able to make full use of the foredeck, which became a second signature feature.”

The larger yacht has five guest cabins (3 VIPs and 2 singles) on the lower deck, with access from the main salon aft. The smaller 30m has two VIP suites amidships plus a single cabin accessed by a central staircase from the main salon.

The 43m has forward accommodation for six crew and a captain’s cabin on the forward main deck with direct access to the wheelhouse above. The 30m can sleep five crew including the captain on the lower deck. Both models have a crew dinette and the 40m also has a dedicated laundry.

The widebody main deck aboard the 43m is arranged along the port side and comprises a generous salon with bar, a separate dining room, the galley and adjacent pantry. The captain’s cabin is opposite the galley. The 30m has a smaller salon, galley and pantry, and a full-beam master stateroom forward with a large walk-in wardrobe and private day lounge.

Notable modern features of both yachts are the terraced aft decks leading down to the swim platform and the second open-air lounge with pool on the foredeck. On the 43m the pool area is just in front of the wheelhouse, whereas on the 30m it overlooks the mooring station.

Both yachts have an aft section on the sun deck made of glass that is designed to incorporate solar cells to provide auxiliary hotel power. The engine room is also configured with space for battery banks to allow silent, zero-emission manoeuvring or cruising at low speed in protected waters for limited periods.