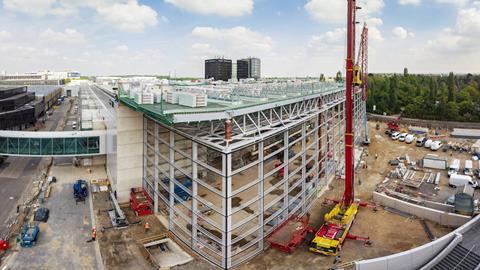 The Dusseldorf boat show is set to undergo a transformation spearheaded by its new, yet to be completed Hall 1, that journalists were given a sneak preview of yesterday. According to Werner Dornscheidt, CEO of Messe Düsseldorf, construction of the new hall represents €140 million–worth of investment and will play a major role in a change of concept for the singature show that celebrated its 50th anniversary this year.

Not to be outdone, fello trade fair company Messe Berlin, will also be making the most of the new venue bringing its Boot & Fun exhibition to the new hall for the first time in November.

As for boot Düsseldorf 2020 the planned changes are extensive:

The new Hall 1 is expected to feature medium-sized motoryachts with inboard engines from 30 to around 60ft in length. Large series manufacturers such as Jeanneau and Beneteau, Sealine and Greenline will show their novelties. Bavaria Yachtbau will be presumably presenting its first new boat models since its re-start here. Dutch steel yachts from manufacturers such as the traditional Linssen shipyard will also be moving into this hall.

The new layout continues in Hall 3, where motorboats with outboard motors can be seen. Hall 4, not really well-defined for a long time, will be the new home for outboard engines and sport boats.

Changes in the other halls

There is little news on the ’sailing side’ of boot Düsseldorf. Three complete halls – halls 15 to 17 – will be dedicated to sailing from 2020. The Dutch section of steel motor yachts moves to hall 1. In addition to Hanse, Bavaria and Hallberg-Rassy, sailing brands such as Oyster and Nautors Swan have already confirmed their attendance.

Hall 5 will be upgraded. The new ’Superboat Hall’, will feature the luxury segment for motorboats and luxury tenders from brands such as Sacs, Wally, Blue Game, DeAntonio, Boesch, Fjord, Frauscher and Windy will be on show. As in the past, the large-series manufacturers will also continue to be present.

Solid hull inflatable boats as well as smaller dinghies will be presented in hall 9. Accessories, inboard engines and equipment will form the core of the halls 9, 10 and partially of hall 11, where electric motors and on-board electronics can also be found.

The largest diving exhibition in the world will take place in halls 11 and 12 of boot Düsseldorf in 2020. The diving halls are next to the water tourism halls 13 and 14 with the ’Travel World’ section.

For the visitors the new hall concept could be a major win according to Jürgen Tracht of the German boat industry association BVWW. The entire motorboat sector will be located in the halls 1 to 6. The diving segment in hall 12 and part of hall 11 can continue to grow – next to the halls with equipment and accessories (halls 9 to 11) and maritime tourism in halls 13/14.