With less than a month to go, the scene is set for the 51st edition of the Sydney International Boat Show (SIBS), to build on the success of last year. SIBS 2017 proved the biggest event in the show's history, with over 200 exhibitors showing 800 boats and attracting some 63,000 visitors. 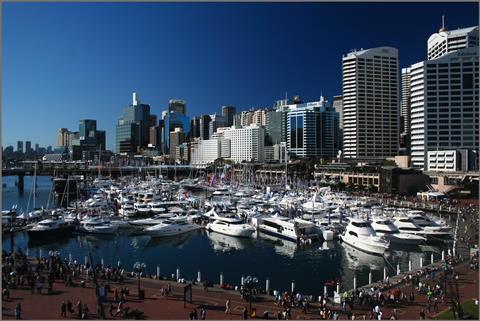 Running August 2-6, 2018 at the ICC Sydney and adjacent Cockle Bay marina in Darling Harbour, SIBS 2018 show will see a number of important global and regional premieres at what the Southern Hemisphere’s biggest boat show.

Riviera, Australia’s leading yacht and boatbuilder, will have the world launch of its latest Sports Motor Yacht collection, namely the new 39 Sports Motor Yacht. Riviera will have an on-water showcase of 11 motoryachts and the company also plans to exhibit the new sporty and 395 SUV and the long-range and luxurious 72 Sports Motor Yacht. Other yachts in the line-up will be the 6000, 5400 and 4800 Sport Yachts; the 52 Enclosed and 43 Open Flybridge models, the 575 and 445 SUVs and their classic Belize 54 Daybridge.

Riviera owner Rodney Longhurst said: "Our team at Riviera is proud to unveil our outstanding new 39 Sports Motor Yacht to boating aficionados in Sydney. She provides a compelling new entree to the Riviera family. Our world-class design team and engineers have crafted a sophisticated new hull and deck design, with raised bulwarks on the side decks and multiple entertainment spaces that are emblematic of Riviera Sports Motor Yachts.”

Following on from its most successful show at Sanctuary Cove in May, Maritimo is looking for another major milestone for long range luxury motoryacht manufacture in Australia with the global launch of the new X50 sport yacht at the SIBS. The X60 and now the X50 are billed as introducing superyacht design and thinking into a market sector with broad affordability.

The X60 attracted multiple pre-sales and has generated notable ongoing interest. Maritimo says it is confident the X50 will see similar success. The company will display the S70, S51, M 51, X60 and revealing the X50.

Multihull Solutions is busily preparing for the Sydney show where it will stage the Asia Pacific launch of its latest sailing catamaran from the Fountaine Pajot shipyard, the Astréa 42. The MY 44 power catamaran and the Lucia 40 sailing catamaran will also be displayed.

One of the most unique vessels at the show this year includes the amphibious Sealegs land and water craft. Not needing a marina or established boat ramp, the Sealegs can literally drive directly into the water from the beach or shore using 3-hydraulically powered wheels attached to the hull, which have no drag once fully retracted.

“This year we are delighted to launch to the world Sealegs' very own 8.5 Alloy Cabin which will make its debut at SIBS 2018. We have already presold to customers in Australia off the drawing board and this model is going to be a real gamechanger for this country,” Sealegs Australian sales manager Michael Rigby said. Also on display will be the Sealegs 7.7 metre Sport D-Tube and 7.1 Sport Rib, already popular with shorefront property owners and waterway regulatory bodies worldwide.