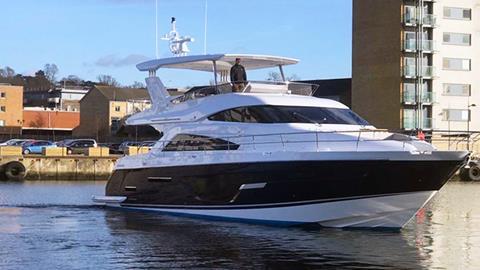 UK boatbuilder, Fairline Yachts, has waved farewell to its popular Squadron 65 as the last one left the company’s Commissioning & Handover Centre in Ipswich, UK.

The 65-foot Squadron ends its 10-year production run to make way for a new large Squadron, which is already under construction at Fairline’s recently opened production facilities in Hythe, Southampton. A total of 79 Squadron 65s have been built since the yacht’s launch in 2009.

David Tydeman, Executive Chairman at Fairline Yachts, comments, “The Squadron 65 has proven a very popular model with our customers around the world over the last 10 years, with its combination of free-flowing luxurious space and considered design. This model has laid the foundation for the next generation of Fairline flybridge models, the first of which hits the water this summer.”

Editor’s suggested read:
Scaling up production is top of the agenda for UK yard