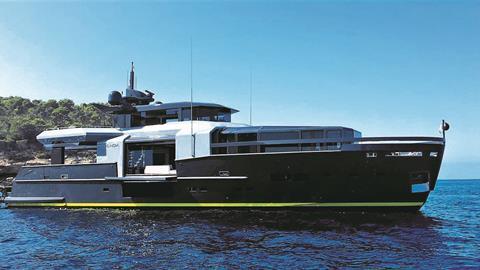 Italian boatbuilder Arcadia is looking to capitalise on the recent investments made in its production capabilities, as it begins 2019 with the construction of 10 hulls (combined value of over €40m), well underway. Last year Arcadia bought 21% of Marina di Torre Annunziata srl, a production site with a haulage and launching dock, enabling it to increase its dedicated production area to over 47,000 square metres. Arcadia has also reorganised its production layout, which now allows for seven yachts to be in the hull-fitting phase at the same time, with another four being laminated at the same time. There are currently two A85s, two A105s, one A115 and three SHERPA yachts under construction. Two SHERPA XL units are also being built, the first scheduled to have its debut at 2019 Cannes Yachting Festival. Despite the line-up, the shipyard is currently using only 60% of its production capacity.

“In less than 10 year’s activity, approximately 30 Arcadia Yachts vessels have been delivered to their owners,” declared Ugo Pellegrino, the sole director of the Italian shipyard. “We are proud of this result, which encourages us to do even better. Over the next few years, our organisation will concentrate on the new Range and on improved distribution capacity on the one hand, and on a new production strategy on the other. In addition to making the production site more efficient in terms of delivery times, the new strategy will also allow us to meet our Owners’ customisation requests better and better.”

“In less than 10 year’s activity, approximately 30 Arcadia Yachts vessels have been delivered to their owners”

Arcadia builds on-spec a deck and hull for each of its models to help reduce lead times for prospective owners. The shipyard claims to have a ‘boutique philosophy’, building standard hull and deck structures that allow for significant levels of customisation on the part of the owner.

Expanding the shipyard has also allowed it to double the space dedicated to after-sales activities - owners can rely directly on the shipyard for wintering and maintenance operations, a service currently used by 50% of the Arcadia fleet sailing in the western Med. The yard expects this percentage to rise following its yard expansion.