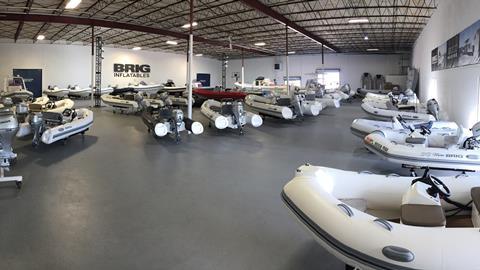 Brig USA signs 15 dealers in the last 11 months and has been named No. 2 distributor worldwide for the Kharkov-based builder

Ukraine-based RIB builder Brig is turbocharging its efforts in the US, less than three years after the manufacturer began distributing its rigid-hull inflatables there.

Brig USA has signed 15 dealers in the last 11 months and has been named No. 2 distributor worldwide for the Kharkov-based builder.

“Each of these dealerships is a leader in its own market,” says Boyd Tomkies, Brig USA’s chief executive officer. “That was important to us, because we want these relationships to benefit everyone involved. The dealers appreciate the Brig brand and the high quality of our boats, and they are valued partners in the effort to grow our U.S. business.”

According to Brig, instead of sticking to the coasts and focusing on the tender market, Brig USA is ready to compete with hard-sided boats everywhere. That includes the inland lakes.

“Other inflatables are not our long-term competition, because we’re looking beyond tenders,” Tomkies says. “Our approach is to focus on watersports boats, pontoons, bowriders, center consoles. We’re targeting families who want a versatile, durable, stable and low-maintenance boat that will allow them to pursue a wide variety of activities on the water.”

The approach appears to be yielding results. In the Brig International Dealer of the Year Award competition this summer, Brig USA took second place.

“The US operation is still in its infancy,” says Neil Webster, who oversees No. 1 Brig distributor Sirocco Marine in Australia as well as Brig USA. “After three years, we are the second largest distributor by volume in the world, and that can only grow in the coming years (thanks to the) acceptance by the boating public. Brig USA is on track to outpace them all and take the No. 1 position in 2019.”

Tomkies and Webster both attribute the growing interest in the States to the massive Brig USA dealership in Fort Lauderdale. In 2017, Sirocco Marine-Fort Lauderdale outgrew its 10,000 square foot location in Dania Beach and opened its current location; at 72,000 square feet, Brig claims its the largest dedicated inflatable-boat dealer in the United States, and one of the largest in the world.

The new facility has the full line of Brig Boats on display, as well as Fluid Watercraft. Visitors are able to see 200 boats from 10 -36ft in length, ranging from tenders and recreational watercraft to commercial and government vessels.

“Our customers in the United States and Australia tell us the product is superb quality, great price, great performance—Brig ticks all the boxes,” Webster says. “We call them ‘Rigid Intelligent Boats.’”

During the 2018-19 boat show season, Brig will be unveiling its Eagle 8, a dayboat and crui