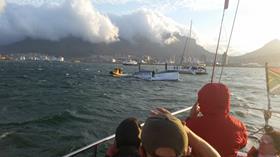 Eight people were rescued from the capsized cruise catamaran

Five British tourists had to be rescued from a capsized sunset cruise catamaran outside Cape Town harbour on Monday afternoon.

The five visitors and three crew were recovered safely by the National Sea Rescue Institute and treated by paramedics for mild hypothermia, the NSRI said.

“They were rescued off the upturned hull and taken aboard the sea rescue craft and brought to the NSRI rescue base at the V&A Waterfront,” said the NSRI in a statement. “Tourism officials are assisting the tourists and the British Consulate were alerted to render assistance to their countrymen.”

The South African Maritime Safety Authority will conduct an investigation into the cause of the accident, which took place in a stiff westerly wind and prompted much commentary on a popular boating social media forum.

“Too much rag and wrong trim,” said one post. “Gimme a good ‘ol monohull,” said another.