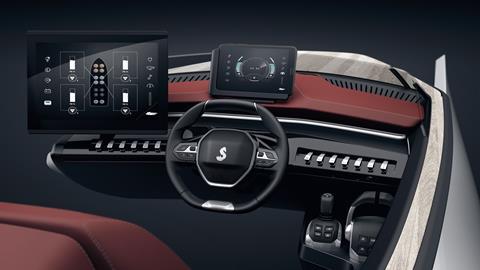 The Sea Drive Concept, designed by the Peugeot Design Lab for Beneteau, has received the Janus Prospective Award from the French Institute of Design during a ceremony held yesterday at the Quai d’Orsay in Paris. The jury appreciated the ergonomics and streamlined look of this nautical dashboard, inspired by the Peugeot iCockpit, as well as its Ship Control connected technology developed by Beneteau. It also recognised the cooperation between automotive and nautical designers to create a concept that could represent the future of nautical dashboards.

It is the frst award received by the Sea Drive Concept. This concept bridge maximises the ergonomics, agility and control of a powerboats captain. Its modern design is constructed around a seamless blend of touchscreens and physical buttons.

“We are proud to receive the JANUS Prospective Award. It recognises the cooperation between Beneteau and Peugeot at the service of ships captains. Innovation is part of the DNA of the two brands. The Sea Drive Concept® combines Beneteau’s Ship Control® technology and the ergonomics of Peugeot’s i-Cockpit,” declared Luca Brancaleon, general manager of Beneteau. 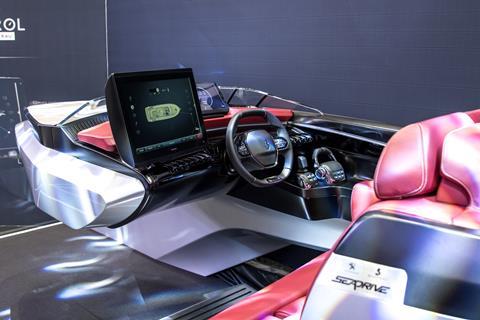 The Ship Control interface is an onboard computer which assists in both navigation and life onboard the boat. Its connectivity allows the crew members to consult information about the boat: navigation, engine regime, control of the level of the batteries and reservoirs, air conditioning, lighting, and Hi-Fi.

The Peugeot i-Cockpit is equipped with an 8-inch capacitive touchscreen and a customisable and configurable head-up digital display, a compact steering wheel with integrated controls and is currently used across a number of cars in its range.

The Sea Drive Concept has the same characteristics. The compact steering wheel facilitates maneuverability, the touchscreen allows the driver to access the boat’s functionalities via the Ship Control interface, and the toggle switches control the main functions. A detachable tablet, specifc to the Sea Drive Concept, shows navigation information at eye-level.

The Janus labels of excellence are awarded by the French Institute of Design and recognise innovative creations. The jury of 50 independent experts evaluates the projects according to five criteria: Economy, Aesthetics, Ergonomics, Ethics and Emotion.