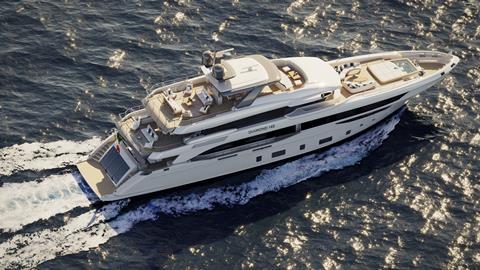 The 44m displacement yacht is currently being fitted out in Viareggio

Italy’s Benetti Shipyard has announced the sale of its first Diamond 145 model, the 44m displacement yacht presented last September at the 2108 Cannes Yachting Festival. The new flagship in the Class product line is a yacht that symbolises power and balance.

“Diamond 145 was presented only four months ago but right from the design stage we realised it was a model with incredible potential, representing the perfect synthesis of the core features of the Benetti Displacement Class across its entire history,” says Benetti CEO Franco Fusignani. “BP001 is currently being fitted out at the Viareggio shipyard and will be delivered to her owner in the first half of 2020.”

Diamond 145’s sleek, clean exterior lines were designed by Giorgio M Cassetta and the interiors, which were customised to reflect the owner’s tastes, are flooded with natural light.

As well as spacious interior volumes, the yacht also has extensive glazed surfaces not only in the saloons, but also in the guest accommodation and the owner’s cabin. The master cabin is full-beam, with a big wardrobe, a full-beam bathroom and an office, and occupies the bow area on the main deck.

Amidships on the main deck are the galley and services area, with a big saloon further aft. At the owner’s request, it was decided to leave more space for the lounge area furnished with big sofas in the main saloon.

The dining area has been moved to the upper deck. The lower deck contains the night area for guests, with four double cabins, and a separate area for the crew accommodation. Outside, a low table and various sofas provide opportunities to relax at sea and at anchor. The beach club in the stern is designed to be at water level.