Bluegame expands with new models and entry into multihull market 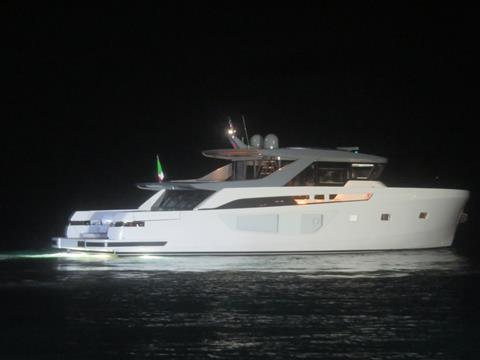 The Bluegame BGX 70 is making its debut at Cannes

A major expansion of the Bluegame brand, under the Sanlorenzo umbrella, was announced at the start of the 2019 Cannes Yachting Festival.

The strategy includes four new models in the BG and BGX Bluegame boat series, a new BGM multihull series, and a new-build facility near Viareggio which is in development.

This arm of the Sanlorenzo group, led by Carla Demaria as CEO, has moved quickly since a majority stake was acquired just a year ago. Demaria is also heading up Sanlorenzo’s new High-End Division which is intended to develop new business projects in the future.

The BG42 will be powered by the new IPS 650 engine and be presented with new colours and features such as custom cushions.

No timing of when BGM models might be launched was given.

In respect of Bluegame, Demaria explained that Bluegame’s brand positioning was centred on having a “game changer attitude”. It is about being courageous and independent and not being tied to a conventional choice. The brand combines passion, innovative design and versatility. Being free from category conventions allows it to combine the power and luxury with the pleasure of embracing new challenges.

Explaining the planned entry into the multihull market, Demaria gave the following reasons:

In regard to the latter point, Bluegame says it has developed the world’s first-ever direct mould that is made from 80% recyclable material. This project saw Sanlorenzo and Bluegame working in partnership with Politecnico di Milano, GS4C operating in the study of environmentally compatible industrial systems, and Rivierasca, owner of Glebanite technology.

Resin glass recovered at the end of life mixed with glass fibres and unsaturated polyester resins has allowed the creation of milling blocks with 80% of recycled material. This material will be recycled again.

“This technology reduces the environmental impact by creating a virtuous path of Circular Economy that from waste glass fibre allows to create blocks for milling new moulds,” Demaria commented. “Our philosophy is based on the development of environmentally friendly boats with technological contents aimed at maximum efficiency and energy saving using innovative materials and solutions. On such purpose we have created the Bluegame HTS Lab (High Technology and Sustainability Lab).”