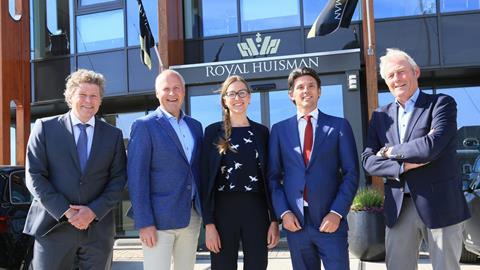 With the opening of a new location at the former Holland Jachtbouw shipyard in the port of Amsterdam, Royal Huisman is the second yacht-builder with a Royal Warrant on the waterfront

Spring 2019 has been a busy one for Dutch yacht manufacturer Royal Huisman, with the opening of a new, second location on the Amsterdam waterfront and considerable progress made toward completion of the fast motoryacht Project Phi.

The company announced it has obtained a new production facility in the port of Amsterdam, occupying the former Holland Jachtbouw shipyard which came under Port ownership in mid-month. This makes Royal Huisman the second superyacht manufacturer to join the port community, following Feadship Royal van Lent which opened its facilities there in 2016.

“In extending our facilities in the Amsterdam region, we will be able to properly meet the growing demand among current and new customers,” says Royal Huisman CEO Jan Timmerman. “This second shipyard will, over a longer period of time, serve as an excellent addition to our existing site in Vollenhove both for new builds and refits.” 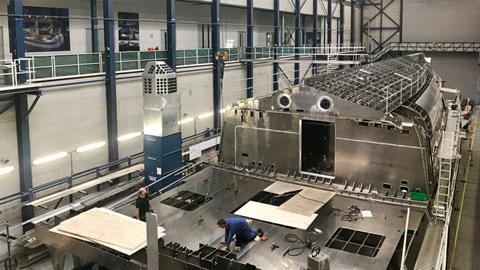 Royal Huisman has made considerable progress on the radical Project Phi aluminium motoryacht that has been under construction at its Vollenhove facility since February. Hull turning is scheduled for this summer, with final delivery in 2021

In the wake of that announcement, the company released the first-yet construction photos of Project Phi, the radical, fast displacement aluminium motoryacht which has been under construction at its Vollenhove yard since mid-February. Based on the patented Fast-Displacement XL concept by Van Oossanen Naval Architects, the 55m yacht will utilise a fuel-efficient hull design that will allow it to remain within the sub-500GT category. The resulting hull will, in the words of the company, “provide a comfortable and stable platform for this radical and high performance vessel, notwithstanding the relatively narrow beam that contributes to Phi’s striking looks.”

Hull turning is presently scheduled for summer 2019, with delivery expected in 2021.