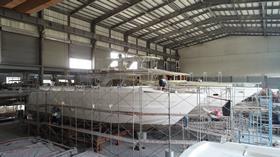 The Johnson 70 in build in Taiwan

Construction of the Bill Dixon-designed Johnson 70 motoryacht has commenced at Johnson Yachts’ shipyard in Kaohsiung, Taiwan.

Aimed at those who want superyacht-level customisation, the design of the 21.3m (70ft) yacht capitalises on its 5.6m (18ft) beam to offer an exceptional amount of space and a choice of either three or four staterooms.

Owner input, says Johnson, is encouraged not only on the design of the accommodation, but also on the helm area, saloon, dining area, and galley.

The flexibility of the design also allows either an open flybridge or an enclosed skylounge, enhancing the onboard living space to suit the needs of each owner.

“With our proven engineering, we have the flexibility to accommodate their needs, and can work with each owner to create a unique Johnson 70,” says Andy Huang, president of Johnson Yachts. “Every yacht owner knows his or her needs far better than we do – but we can build a Johnson 70 to suit each one of them, and create something special. We’re very excited to get the word out about the Johnson 70.”

Should yachtsmen request a skylounge, the layout precludes the need for a lower helm, and the result is a single-level blank canvas on which yacht owners can work with Johnson to create the shared spaces they’ve always wanted. A fishing cockpit can increase the yacht’s flexibility, as each build in the series is expected to be set apart from those before.

“We designed the Johnson 70 as a sporty flybridge, with class-leading accommodation, and a large single-level main deck,” says Bill Dixon. “One of the key features of the design was to be able to offer both flybridge and skylounge versions. We like to think that for the size of vessel the skylounge version is extremely sporty in its styling.”

Interiors for Hull No 1 will showcase a concept created by Design Unlimited, and provide a mix of textures in fabrics and materials.

Below deck, an amidships master stateroom uses the full beam to expansive benefit, with a king-sized berth flanked by a desk or dressing table to port and a settee for lounging in private to starboard. Large hullside windows add natural light and an enhanced feeling of openness. A head compartment with large shower and a walk-in closet area help to insulate the master from the engine room and mechanical space.

Forward in the bow, a VIP stateroom has a queen-size island berth and hull-side windows. The stateroom also has a hanging locker and additional stowage, and is served by a private head compartment with separate shower.

In the three-stateroom layout, the guest stateroom is to starboard with a private head and an athwartships berth situated to optimize the onboard space. Opposite the passageway to port is a generous laundry room replete with copious amounts of stowage suitable for extended cruising.

In the four-stateroom layout, that service area becomes the fourth stateroom, as the third and fourth guest staterooms become twin-berth affairs and share a portside head compartment, which also serves as the dayhead. As is typical on Johnson yachts, the twin berths can be specified to slide together to form doubles, depending on the desired sleeping arrangements.

Abaft the engine room is a two-berth crew’s quarters, with its own head with separate shower, suitable for crew on extended cruises or for kids who need some space in a true owner/operator arrangement, and is finished to high standard.