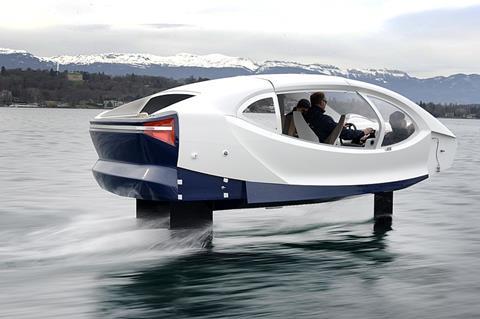 A three-year-old French startup, SeaBubbles designs and makes electric water transport craft. Its “ecosystem” is growing and will in the years ahead comprise autonomous water taxis, buses for up to 90 passengers, an app and a docking system with power points.

Dutch businessmen Minze Walvius and Maurice van der Meché say they have acquired the right to market and develop SeaBubbles products in the four European nations and Dubai.

SeaBubbles plans to be active in 50 cities by 2024, all mooring at innovative docking/energy stations.

“We open waterways by creating a new way to move at car speed, for the price of a regular cab. With no impact on either the environment on urban infrastructure,” says Anders Bringdal, a two-time world champion windsurfer (2009 and 2010) and SeaBubbles co-founder with French yachtsman Alain Thebault.

Thebault headed the team behind l’Hydroptere, the French experimental hydrofoil trimaran that in 2009 set a world record with a speed of 50.17kt (92.91km/h)