Elling Yachting returns to US market 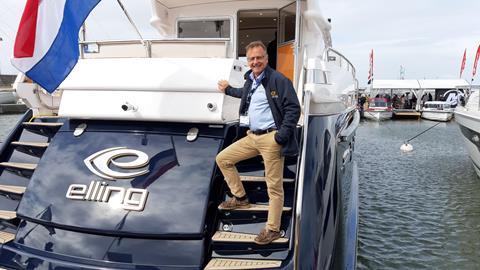 Elling Yachting is returning the United States where its sales have picked up in recent years.

The Dutch maker of self-righting, long-range composite trawler yachts has found a dealer in New England and will be at the Newport International Boat Show (September 12-15) at Newport, Rhode Island, says Anton van den Bos, director of Neptune Marine Shipbuilding, the manufacturer of Elling yachts.

“We’ll also be showing at Cannes this year. I’m looking for a dealer in France,” he told IBI at the HISWA-in-Water Boat Show in the Netherlands.

Elling was active in the US until the 2008 financial crisis there triggered a recession in developed economies worldwide. Since 2016, he has sold four Ellings there. Ellings come in three models – from 14m-20m (45ft-66ft) – and are self-righting. Van den Bos famously filmed himself inside an Elling 4 making a 360-degree roll.

Van den Bos sees a market for his yachts on both the US east and west coasts and counts on the Ellings’ passage-maker looks to help sales there. His biggest market is Russia (six sales a year), followed by Germany (four).

Elling Yachting just recovered from a 2017 fire that caused massive damage. “We survived that and are on course to build 15 yachts a year,” said Van den Bos.

Elling Yachting is something of a one-off in Holland, building high-end composite motoryachts in a country best known for steel and aluminium yacht building.