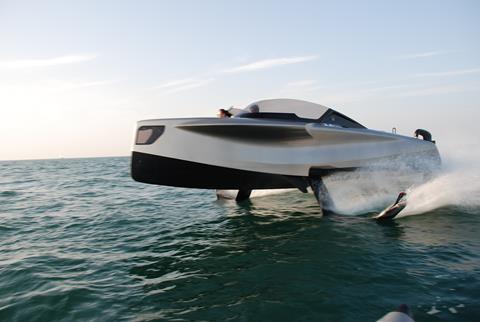 The ENATA Foiler can handle waves of up to 1.5m at speed

A leading exhibitor in terms of innovation at this year’s Abu Dhabi International Boat Show (ADIBS) in the UAE was local company ENATA, which showed the final production version of its ‘Foiler’ – which claims to be the world’s first production fully foiling powerboat.

The week after ADIBS, IBI’s Middle East and Asia correspondent was invited by the company chairman to be one of the first journalists to experience and test the Foiler on the water. From a standing start, the boat starts to lift onto the foils at 12kt with flight fully commencing at 18kt. Riding 1.5m above the sea surface, the boat runs as if on rails.

What is particularly impressive is how the craft handles waves up to 1.5m high at speed. While the sea state during the test was fairly calm, going through the substantial wash of a large powerboat at 35kt was a complete non-event; the Foiler ran rock steady, any high speed boat of similar length (9.6m) without foils would have jumped out of the water, with an uncomfortable ride for the crew. A novel concept is the ability to control the boat from the forward cockpit using reclined seats and a single joystick control. This really works well, like flying a helicopter at very low level.

ENATA points out the ‘green’ credentials of the Foiler in its technical specifications. “In keeping with current global trends, the green footprint of the boat is enhanced when it is fully foiling as the efficiency gain over conventional yachts is 20% at low speed and in excess of 50% at high speed. A good example of the efficiency is that the maximum speed for the yacht in Archimedean mode (ENATA’s term for conventional mode) is 24kt, while using the foils its 40kt using the same power.

”For use in the Archimedean mode, the foils retract completely offering a draft of .6m and alongside berthing. There is also garage mode for a reduced air height.”

The Foiler had its original debut at the Dubai International Boat Show (DIBS) in March 2018 using diesel electric power. Since then, the final production ‘2020’ version has been developed. It was aptly named with the forthcoming World Expo in Dubai next year.

ENATA offers the Foiler with a high level of customisation in terms of interior trim and finish and the new 2020 model also features a very significant propulsion upgrade. The hybrid propulsion has been replaced with what ENATA claims is a more efficient hydraulic propulsion, using industrial-grade hydraulic systems that are extremely reliable and durable. It is powered by two V8 marine diesel engines, providing a total of 740hp.

ENATA claims they have conducted extensive research to further optimise the drag of the torpedoes powering the Foiller, leading to a significant increase in speed, efficiency and a reduction in noise levels.

Speaking to IBI at the Abu Dhabi show, Alois Vieujot, a company director, said: “To date we have had 12 orders and many more enquiries to follow up with lots of interest from Europe and the USA, especially from superyacht owners. We manufacture the Foiler at our factory in the Hamriyah Free Zone of Sharjah UAE. The manufacturing process uses resin infused epoxy and carbon fibre for both the foils and the hull, which is required to build a light and strong flying yacht.”

IBI visited the ENATA factory in 2018 and it was the first time that both boat and drones were observed being built in the same hi-tech facility. This is definitely a new kind of technology and production process that offers the potential to change the industry.

ENATA and its new Foiler will be profiled in an upcoming issue of IBI magazine.