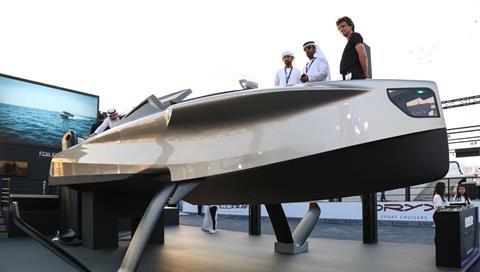 The ENATA Foiler, made in the UAE, on display in Dubai

Hailed by its builders as the world’s first production foiling yacht, UAE-based ENATA Industries’ new ‘Foiler’ had its world debut at the Dubai International Boat Show in March 2018 and has now been upgraded. The company has released images and details of its new 2020 edition which, according to the company, has received many upgrades. It features a new forward cockpit with a revolutionary joystick which ENATA says will give the ultimate experience of flying above the water with the pilot comfortably seated in the bow.

“The new joystick creates a unique and instinctive driving experience,” says ENATA. “You sail, or should we say fly, in complete serenity. With power and controls at your fingertips, you overtake conventional slamming and rolling powerboats effortlessly. From the traditional driving console with its wheel and throttle, you can choose to activate the joystick installed on the front seats. The joystick then controls the speed and direction of the Foiler. By pushing forward or pulling back on the joystick, you can adjust the speed from a standstill up to 40 knots, tilting on either side controls the direction. This innovation that ENATA has developed over the past year, makes you at one with the Foiler which becomes like an extension of your body”.

ENATA offers the Foiler with a high level of customisation in terms of interior trim and finish and the new 2020 model also features a very significant propulsion upgrade. The hybrid propulsion has been replaced with what ENATA claims is a more efficient hydraulic propulsion using industrial grade hydraulic systems that are extremely reliable and durable. It is powered by two V8 marine diesel engines, providing a total of 740hp.

ENATA has conducted extensive research to further optimise the drag of the torpedoes powering the Foiler, which they claim leads to a significant increase in speed and efficiency and a reduction in noise level.

In a past interview with ENATA at their factory, chief operations manager Mostafa Agib El Nahta described how the project was progressing. “We are bridging the gap between foiling sailing yachts, which in recent years have made large advances in foiling technology, and motor boating, which has not developed the concept of foiling to the same extent,” he said. “One of our key drivers for the project is to deliver the ultimate foiling machine, without any compromise on the sailing experience and handling. We also focused on the performance and maintenance of the Foiler whilst delivering an environment friendly boat.

Company chairman Sylvain Vieujot told IBI: “The Foiler delivers a smooth and exhilarating ride for the passengers due to its foiling system that allows the yacht to fly at up to 1.5m above the sea surface at speeds over 17kt. The green footprint of the yacht is enhanced when it is fully foiling as the efficiency gain over conventional yachts is 20% at low speed and in excess of 50% at high speed. A good example of the efficiency gained is that the maximum speed for the yacht in conventional mode is 24kt while using the foils it can achieve 40kt using the same power.

The Foiler will be one of the key attractions at the Abu Dhabi International Boat Show taking place from October 16-19, 2019.