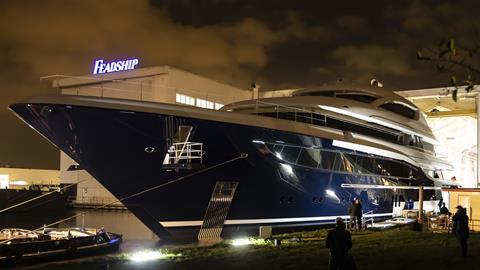 The 73m custom yacht was built for a repeat client

Viewers were given an early glimpse of Feadship’s new 72.85m yacht today as it emerged from the yard’s construction hall in Aalmseer in the Netherlands.

Built for a repeat client, Project 705 will have its official launch in a few weeks’ time, at which point its name will be revealed.

As the yacht emerged from the hall, onlookers were drawn to its dark blue hull, white superstructure and continuous band of glass which is flush to the exterior. Glass railings with a teak cap rail offered another visual treat, along with a wealth of stainless steel and high-gloss eucalyptus details.

Project manager Gerhard Dekker praised the spirit of cooperation between the owner’s team, the designers from RWD, Feadship De Voogt Naval Architects, and the yard in Aalsmeer. “It may be a cliché but I truly believe that it takes a team to build a dream, and the way in which everyone has played their part in creating this exceptional vessel is a textbook example of teamwork.”

There are many innovative features onboard Project 705 which the company says will be detailed at a later date.