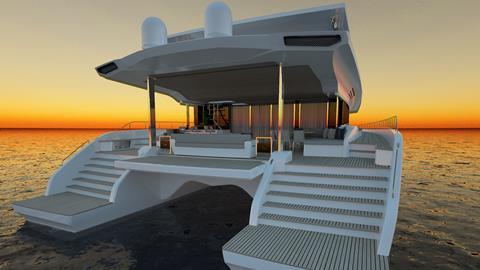 Silent-Yachts, the Austrian producer of solar-electric catamarans, has announced that it has sold four of its new flagship models, the Silent 80 (previously Silent 79) in recent months.

The first Silent 80 was sold to South African owner Neil Murray, co-founder of the NASDAQ-listed mimecast.com. The yacht is currently in build in Ancona, Italy, with delivery planned for early 2020.

Three more units have also been sold to owners and will be delivered later in 2020.

“To me, this yacht is a great synthesis of form and function,” says Murray. “My intent is to promote the concept of solar yachting and I want people to see elegance in the concept, not just practicality.”

Silent-Yachts’ solar-electric catamarans use silent electric propulsion for unlimited range without noise or fumes and minimal vibration. They are self-sufficient and virtually maintenance-free.

The Austrian shipyard claims to be the world’s first and only series producer of ocean-going solar-electric catamarans.

“We’re extremely happy to confirm that the project that was first announced in the end of 2018 as a 79-footer has gained one foot in length during negotiations with a client,” says Michael Köhler, founder and CEO of Silent-Yachts. “I’m sure Mr Murray and his lovely family will be having many memorable moments cruising together in pure silence and absolute comfort on board their new yacht.”

The catamaran is capable of going at 6-7kt in complete silence and with unlimited range passing around 100Nm per day. With 70 high-efficiency solar panels rated for approximately 25kW-peak, the Silent 80 uses maximum power point tracking (MPPT) solar charge regulators and the same lithium batteries as used by Tesla, which provide capacity for all-night cruising, while a 20kVA inverter provides power for all household appliances.

Michael Köhler created the Silent 80 concept, while Amedeo Migali of MICAD is responsible for naval architecture. Marco Casali of Too Design designed the exterior and interior of the new yacht. In terms of styling, the Silent 80 is an evolution of the company’s vision. It carries the DNA of the smaller Silent 55 model but on a much larger scale.

“I think solar-electric boats are the future, says Casali, who has worked on superyacht projects for ISA Yachts, Columbus Yachts, Itama and Canados. ”That is why I immediately agreed to work with Michael Köhler on his exciting venture.”

“Solar power is about square meters, so we need to dedicate as much surface to the solar panels as possible, while keeping the overall balance in shape,” he adds. ”In my opinion, we managed that with the Silent 80. What I tried to achieve is an interesting Italian design, sophisticated and refined. This is a nice-looking yacht that meets efficiency.”

The Silent 80 exterior is clean and timeless with straight lines of huge windows. They allow an abundance of natural light to fill the saloon and guest spaces while providing panoramic views throughout. Carrying solar panels, the flybridge adds sportiness to the look, thanks to horizontal air grills inspired by supercars but with eco appeal.

The Silent 80 is also available in several different layouts.