The crowning sale was the 85m Lürssen-built M/Y Areti 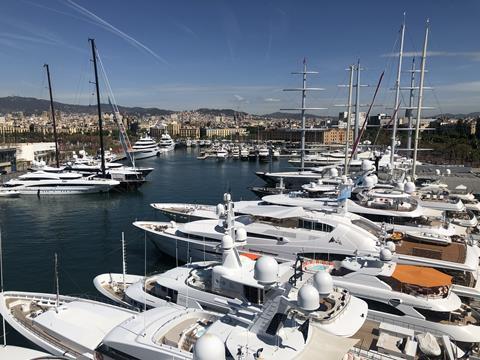 The 2019 Superyacht Show at OneOcean Port Vell in Barcelona

The crowning sale was the 85m Lürssen-built M/Y Areti by Stuart Larsen – the third-largest yacht sold this year.

S/Y Sovereign Sea, a 36.1m high-performance sloop, was built by Alloy Yachts in 1995 and sold by Georges Bourgoignie.

The 2007 Golden Yachts-built 51.8m M/Y Victory was sold through an in-house deal by Vassilis Fotilas.

The 39.4m M/Y Lady Azul was built by Heesen and sold by Jan Jaap Minnema, who also sold the 66.7m M/Y Golden Shadow.

Built by Sunseeker in 2011, the 33.9m M/Y Ira was sold by David Legrand, and the 29.7m Jongert-built S/Y Blue Pappillon II was sold by Dennis Frederiksen.

The positive run of sales came during The Superyacht Show in Barcelona, where Fraser displayed six yachts from 30m-60m at OneOcean Port Vell. The LYBRA-backed event was held from May 8-11 and attracted a good number of clients.

Fraser also closed two further deals through its San Diego office in the past two weeks. The 10.3m Regulator Chasin Tail was purchased by a longtime client of Patrick McConnell for use as a tow-behind tender, and John Gladstone sold the 16.8m Hinckley Solutions.

“These sales are the result of hard work by our brokers and the whole team all around the world,” says Fraser CEO Raphael Sauleau. “We also sold a further two yachts at the start of April, proving that spring really is a perfect time for a new owner to purchase a yacht and be cruising on her by the start of the summer. That’s why we’ve set up the LYBRA Superyacht Show to enable more clients to visit yachts at this peak time.”

Fraser claims to be the largest luxury yacht service provider in the world, with over 160 employees and 20 offices around the globe. Services include yacht sales, charter, yacht management, crew and construction, specialising in yachts over 30m.