Galeon Yachts is heading downunder with dealer Alexander Marine Australia hosting the Australian debut of the Polish brand at the Sanctuary Cove International Boat Show from May 23-26.

Since commencing operations in 1982, Galeon has grown from a small facility in Straszyn, just outside Gdansk, Poland – which originally constructed sailboats for Beneteau and Jeanneau – to become Poland’s largest motor yacht builder with an output of 100 vessels per annum.

In the past few years, the business entered a new era, hailed by the builder as its “third generation”, with a fruitful design partnership with UK-based Tony Castro Design Studio and the up-and-coming Roberto Curtò Design.

The Galeon line of motoryachts has grown to comprise models from 30ft-78ft.

At the 2018 Cannes Yachting Festival in September 2018, the Galeon 640 Fly was awarded the World Yacht Trophy as the ‘Most Innovative Yacht’ in the 60-80ft category, while the 640 Fly and 650 Skydeck models took the top prize in the Innovative Onboard Design Solution category at the 2018 Boat Builder Awards for their “brilliantly social layouts with opening forward doors”. 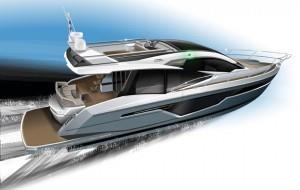 Galeon’s ingenious ‘Beach Mode’ with cantilevered aft side fold out balconies, to port and starboard, that extend the usable cockpit width to 5.66m wide, has become a signature feature of the brand, as has its clever retractable front windshield  that transforms the useability of the space inside by allowing direct access from the stern to the bow.

Powered by twin Volvo Penta shaft driven D8-600hp engines, the Galeon 460 Fly is priced at AUD$1,799,000 inclusive of GST. For those owners who prefer pod propulsion technology the 460 Fly can be Volvo IPS powered.

The Galeon 510 Skydeck, with a length overall of 16.2m (53ft), shares the same hull as the highly-awarded 500 Fly, along with an innovation ’Skydeck’ design.

Alexander Marine Australia is the dealer for Ocean Alexander and now Galeon yachts in Australia and New Zealand, specialising in the sale of new and used motor yachts. It is based at the Boat Works Marina and Shipyard in the heart of the Marine precinct of the Gold Coast, Queensland.