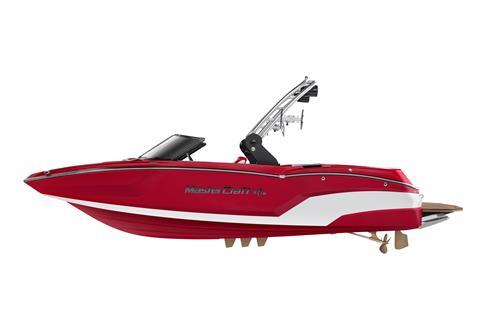 MasterCraft Boats is revamping its entry-level NXT product line for the 2020 model year to “deliver a more athletic and refined look with an all-new interior, exterior, and even more performance,” according to a company news release.

“Our NXT Series has been a breakthrough success for the company since its inception in 2015 and welcomed a new community of MasterCraft owners,” said Terry McNew, president and CEO. “We’re pleased to offer customers even more performance, features and value with the new NXT models which have been totally redesigned for the 2020 model year.”

Likely the biggest update for the “crossover towboats”, the base engine has been upgraded to the new Ilmor Marine 6.0 L MPI powerplant delivering 380hp, 60hp more than its predecessor.

MasterCraft says it has “elevated the helm experience” with an improved captain’s chair, electronics package, gauges and aesthetic accents. The company has also made improvements to the boats’ tow tower with optional upgrades to the audio system.