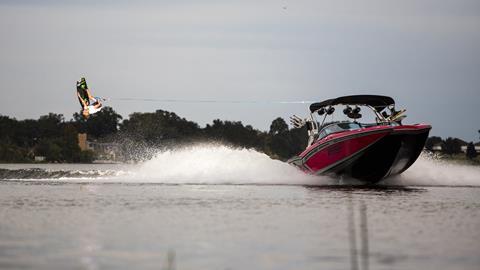 MasterCraft Superyacht Tenders is offering bespoke coaching with Team GB Wakeboarder And Multi Championship Winner, Dan Nott. The Superyacht tenders team at MasterCraft Boats UK will arrange for Dan Nott to fly out to an owner’s preferred location anywhere in the world. They will tailor a bespoke coaching programme for a day, a weekend, or longer, depending on the wishes of the owner, captain or guests.

Dan Nott is a MasterCraft athlete who has also been a key member of the British Wakeboarding Team for 20 years. Wakeboarding since he was 10 he is a multiple UK National Champion and four times European Champion. He’s been on the podium twice in the World Championships and most recently took second place at the World Cable Wakeboard Championships held in February in Argentina. He also has extensive coaching experience that includes coaching superyacht crew and owners how to drive their MasterCraft watersports tenders to get the best out of them, and to give the best surf or waves to riders behind the boat.

Wakesurfing is growing in popularity as it’s seen as easier to master than wakeboarding. It’s particularly popular with Generation X – that’s those born in the 1960s through to the 1980s - as it gives a softer landing which is ideal while you’re learning. It also makes it ideal for a one or two-day coaching event. Crew-only days can also be arranged.

Recent innovations from MasterCraft include its Gen 2 Surf System that serves up customised waves at the touch of a button and the patented DockStar Handling System. Most recently, at Miami Boat Show, MasterCraft’s X24 won a further innovation award for introducing new technology including the new FastFill Ballast System that fills the X24’s ballast tanks in under three minutes. The X24 also sees the introduction of the Switchback Ballast Tank. Once full, the tank instantly shifts ballast from side-to-side to suit a rider’s preference.