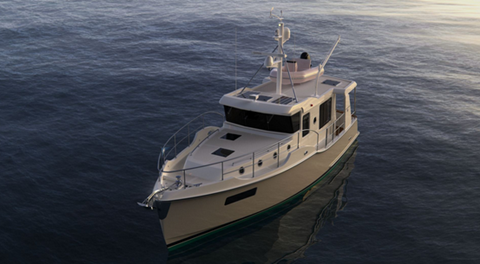 The Nordhavn 41 is currently in build in Turkey

Pacific Asian Enterprises (PAE), renowned for its range of ocean-going motoryachts, has announced a new addition to the fleet, the Nordhavn 41. The yacht is the smallest vessel in the range and has been developed as a replacement for the previous Nordhavn 40, which was retired last year.

The Nordhavn 41 is being built at PAE’s new partner factory in Turkey. The first yacht off the production line is planned to have its debut at the Düsseldorf Boat Show next year.

The sleek, modern Nordhavn 41 has been developed with a low profile and with lead ballast to provide a stable and comfortable ride. The hull design has undergone an advanced and rigorous analysis allowing it to be CE Certified Category A Ocean for offshore conditions.

The yacht is powered by a pair of Beta Marine 75hp diesels based on a Kubota engine that features mechanical controls and injection to avoid the complication of electronic systems. Fin stabilisers and a bow thruster are fitted as standard.

The hull design was originally developed in-house but was then analysed using computational fluid dynamics at the Dutch design team of Vripack to optimise the design and trim.

The 41 will be available in two versions, one with a single luxurious master cabin and the other with two cabins below. A wide range of options is available to allow the 41 to be customised to requirements.