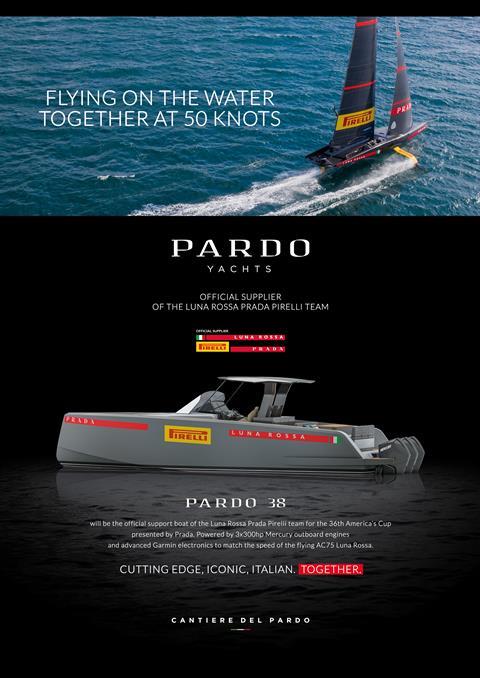 Pardo Yachts, the Italian builder of open walkaround luxury boats, has been made the official supplier to the Luna Rossa Prada Pirelli Team. Pardo will support the Italian challenger in the 36th America’s Cup with three boats – a Pardo 38 will provide technical support to the AC75, and two Pardo 43s will be used as official guest cruisers in the base of Cagliari and in Auckland, New Zealand.

The new partnership was announced at a press conference at the Dusseldorf Boat Show on Monday.

“We are very proud to announce this new partnership and to have such advanced boats to support our AC75 Luna Rossa,” says Max Sirena, skipper and team director of Luna Rossa Prada Pirelli. “Pardo Yachts will guarantee the success of the technical and hospitality programme in the waters of the most prestigious regatta fields of the America’s Cup.”

The Pardo 38 will be one of the technical boats to provide support and assistance to the AC75 Luna Rossa. The version equipped with three Mercury 300hp outboard engines was chosen for its ability to reach a speed of up to 50kt to follow the navigation of the AC75 close up.

The two Pardo 43s will be used as official guest cruisers. It was chosen for several important features which justify its success: it is a stylish boat entirely ‘Made in Italy’ which combines power and elegance, comfort and functionality.

The city of Cagliari will give way to the first regattas from April 23-26, hosting the first stage of the America’s World Cup Series. The subsequent regattas will take place in Portsmouth, England, from June 4-7 and will end in Auckland, New Zealand, from December 17-20.

The Prada Cup, the series of regattas that will see the participation of all teams to select the Challenger, is set to take place in Auckland in early 2021. The Prada Cup will decree the winner who will take on the Defender in the 36th America’s Cup presented by Prada, scheduled from March 6-21, 2021, in the gulf of Hauraki, Auckland.

Pardo Yachts will follow the team’s path for the entire duration of the event.