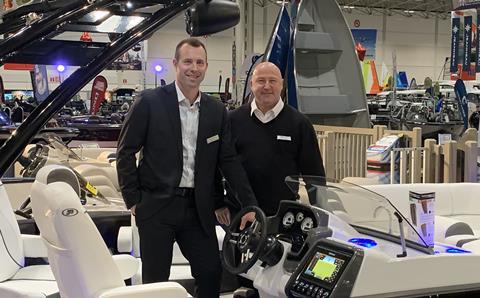 The Quebec-based company used the show to formally introduce its all-new Vogue RL premium pontoon line, consisting of upscale 25ft and 27ft models. The RL designation refers to its multi-function rear lounge seat that provides both forward-facing and multiple aft-facing seating positions, or can be lowered to a completely horizontal position to form an expansive sun pad.

“Both the Vogue 25 RL and the Vogue 27 RL beautifully complement our Vogue pontoon series, with models from 23 to 29 feet,” said Jean-Philippe Martin-Dubois, director of marketing and customer experience at Princecraft. “The RL models come with everything a boater could want, including space for an optional head.”

The boat on display at the Toronto show drew a lot of attention with its colour-matched Mercury 450R outboard. “In testing I had the boat over60 mph,” said Princecraft president, Rodier Grondin. “It drives beautifully so it will please the performance enthusiast, while still providing all the versatility and comfort that pontoon boats are known for.”

The Toronto show also marked the public debut of Princecraft‘s new-for-2020 Platinum SE series of premium aluminium fishing boats. “The Platinum SE series set a new benchmark in our portfolio, allowing our customers to experience the very best that Princecraft has to offer,” said Grondin.

The Toronto International Boat Show runs through January 26 at the Enercare Centre on the Toronto waterfront.