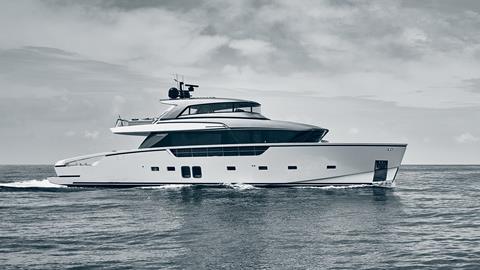 Hull 14 is scheduled for delivery in early 2020

Sanlorenzo Spain, the exclusive agent for Sanlorenzo in Spain and the Balearic Islands, has sold its first new-build 26.7m SX88 yacht to a Central European client. The Sanlorenzo SX88-35 is scheduled for delivery in early 2020 as the 14th hull of the Sanlorenzo SX88 model, which was first introduced to the market at the 2017 Cannes Yachting Festival.

As the flagship model of the SX range, the SX88 is is described as a “crossover” yacht that blends heritage Sanlorenzo exterior lines with a large 30sq m aft beach club with an integrated crane system, Volvo IPS propulsion, an efficient use of interior volume and the latest nautical innovations. The yacht is built in GRP with carbonfibre infusion technology and has a semi-displacement hull. Equipped with a triple Volvo IPS 1050 800hp engine option, it can reach top speeds of 23kt.

The SX88-35 will be extensively customised for its experienced owner. A four-cabin interior layout will provide accommodation for up to eight guests on the lower deck divided into a master stateroom, a forward VIP cabin and two twin cabins. It will feature a dining area forward on the main deck, in lieu of the alternative additional saloon option, forward galley option or main deck master stateroom.