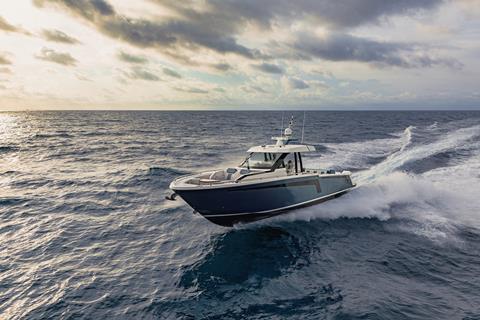 Alexander Marine, the US importer of Taiwanese-built Ocean Alexander yachts, has announced the recent sale of four new motoryachts. Three inventory sales occurred on the US east coast and another on the west coast.

“This client has been in the marine industry for many decades and this is his seventh boat,” he said. “This is his first Ocean Alexander and what drew him to the yacht was the beauty, seating, massive cockpit with opposing sofas, large bow lounging. He just couldn’t get over how unique and beautiful the yacht is. It’s perfect for entertaining and picnics.”

According to Lennon, the OA 45D was prominently displayed at the company’s MarineMax Luxury Event and was the hit of the display with yachts to 70ft. “The yacht was on the main dock and people could not stay away,” he said.

James Corts of MarineMax Yachts in Naples, Florida, sold two Ocean Alexander yachts prior to the end of second quarter. The first was an Ocean Alexander 88 Special Edition to a new client moving up from a Princess yacht. “The clients were impressed with the spacious interior, generous storage onboard and the enclosed bridge on this model,” Corts said.

The second yacht sold by Corts was an Ocean Alexander 85 Motoryacht to a new client who was moving up from a Lazzara yacht. “The new owner appreciated the size and volume on this yacht. He researched several other brands and felt that this OA 85 provided more living space than many other yachts in its class.”

Corts confirmed that this is the first Ocean Alexander yacht for both of these new owners.

Michael Vrbas, a yacht consultant with the Newport Beach office of Alexander Marine California, sold an Ocean Alexander 70e to new clients as well. This is the first Ocean Alexander yacht for the new owners and they moved up from a Sea Ray 500.

“Some might feel that 20ft is quite a jump when moving up in this size range, but with the technology included in the OA 70e, the buyers were very confident in this move,” he said. “Between the Volvo IPS engines combined with the Dynamic Positioning with Joystick and the Garmin screens that provide information on the multitude of systems aboard, the clients were very impressed with the level of technology included in the 70e.”

Vrbas added: “The strong brand reputation, the performance and handling of this yacht, and the generous layout all contributed to this buying decision.”

Ocean Alexander is one of the top selling brands for large yachts in the US. The company offers a range of models from 70ft-120ft in length.