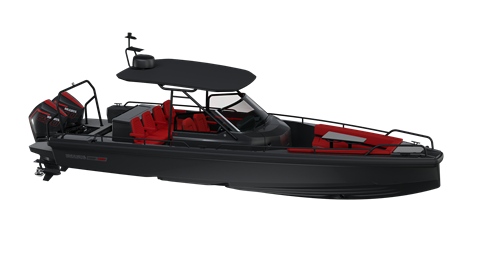 A new company, Undiluted Spirit Ltd, has been formed, to trade as BRABUS MARINE London Group. Part of the Sunseeker London Group, the new venture will be responsible for sales of BRABUS Shadow products across 25 worldwide territories.

The distribution agreement is divided between ‘exclusive’ and ‘non-exclusive’ territories and signifies an important step-change for the Sunseeker London Group, who, for the first time, have placed considerable financial investment in an altogether new, complimentary, luxury boating brand, that will sit alongside sales of the established Sunseeker brand.

Axopar Boats co-founding partner, Jan-Erik Viitala, said: “In the strategic alliance between us and BRABUS we are thrilled and excited to have appointed BRABUS MARINE London Group as official dealers.

“With an existing team of brokers, spread across a very international footprint, this new venture will greatly benefit from their decades of expertise and existing client database, made up of luxury yacht and superyacht owners for whom the latest BRABUS Shadow boats are primarily targeted towards.

“The Shadow boat concept will delight BRABUS MARINE London Group’s discerning clientele. Large yachts such as Sunseekers are fantastic when it comes to true comfort, but owners and guests still love the raw excitement, shear pleasure and unadulterated fun of getting behind the wheel of a fast and responsive sports boat, such as the BRABUS Shadow 800 and our latest BRABUS Shadow 500 launched just recently.

“With such an established international network and customer connections in all the right places, we believe BRABUS MARINE London Group will achieve high levels of commercial success for us, just as they have done so consistently over the last twenty-five years with Sunseeker.”

Axopar Boats co-founding partner, Jan-Erik Viitala, said of the new distribution agreement: “Thanks to our existing dealer network we are already unbelievably proud of the fact that Axopar is a globally recognised and market-leading brand, but now with the addition of the Axopar London Group, we can strengthen and expand that dealership network even further.”

The Axopar distribution agreement is also divided between ‘exclusive’ and ‘non-exclusive’ territories, and will provide a more comprehensive, more value-for-money alternative with the affordable sports-weekender / day-boat market for those customers who may not be looking to invest in the outright performance upgrade and luxurious exclusivity of the BRABUS Shadow range straight away.