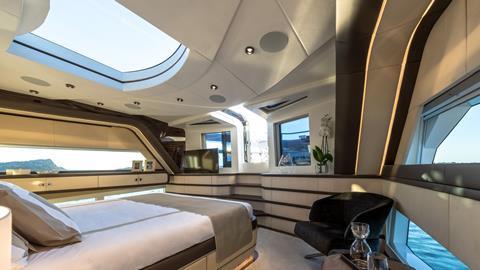 Videoworks, the Italian-headquartered AV and IT integration business, announced yesterday at the Versiliia Renez-Vous 2019 as a world launch, that it is expanding its products and services to smaller production yachts. Up to now the company has focused on providing its state-of-the-art technology to superyachts of which it has provided systems to some 200 vessels.

The expansion to smaller yachts is a logicial step for the company to increase its presence in the global yachting marketing. Each system it provides is bespoke to meet the owner requirements for the yacht on which the system is installed.

To date Videoworks has provided sophisticated systems to a large number of superyachts including recently a 108m yacht built by Benetti. The company’s expansion will allow it to service the smaller end of the market and any production yacht that is able to buy a Videoworks integrated system

Over the past 20 years, Videoworks has steadily expanded and particularly increased its yacht-related activities to craft built in European yards. From its headquarters in Ancona where it systems are made, and especially through its branch in Viareggio, the company has increased its business with the superyacht sector.

Similarly, via its branch in Alsmeer, Netherlands, that opened a few years ago, it is now gaining a firm presence among Dutch and German superyacht yards. Last year it expanded its office network by opening a branch in Fort Lauderdale allowing it to provide customer and after sales services to yachts built for clients in North America and the Caribbean.

Through other partnership arrangements, Videoworks can service owners in South America, South East Asia, China and other markets. The company also has offices in Milan and London.

The systems that will be provided to smaller yachts will offer the same or similar features as to the systems made for superyachts but simply on a smaller scale. The systems offer total integration of systems such as AV, AC and lighting, with control of these being possible from an Ipad or mobile phone through the Videoworks app.