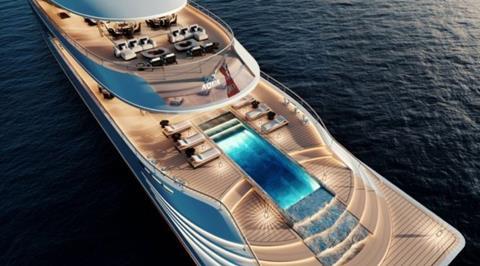 The 370ft Aqua is powered by liquid hydrogen only

Bill Gates is widely reported to be melding his interest in alternative fuels and love of yachting, having commissioned a futuristic looking, 370ft superyacht powered by liquid hydrogen, meaning the vessel’s only emissions will be water. But did he?

Known for his investments in alternative fuel projects and to vacation around the world on a variety of yachts, this would be the Microsoft co-founder’s first yacht purchase, at an estimated US$645m. With accommodation for 14 guests and 31 crew, Aqua boasts five decks that include a gymnasium, yoga studio, hydro-massage parlor and a cascading pool on the rear deck.

But despite its unique look and features, the most impressive is below deck in the engine room, where two, one-megawatt, 28-tonne vacuum-sealed tanks that are chilled to -423F and filled with liquid hydrogen to power the ship, which is said to be able to reach a top speed of 17kt with a range of almost 4,000 miles.

The use of alternative fuels extends to cabin heating, which is accomplished with gel-based fire bowls.

Aqua is designed by Sinot, which released the concept at Monaco in 2019. But the company’s website this morning reads that despite global coverage in publications and websites the world over, “these articles are factually incorrect.”

The landing page on the Sinot website contains a huge, bold headline “Aqua Not Sold,” and goes on to read “Sinot Yacht Architecture & Design wants therefore to make the following clear: the hydrogen concept Aqua is not linked to Mr Gates (or his representatives) in any form or matter, Sinot has no business relationship with Mr Gates, Aqua is a concept under development and has not been sold to Mr Gates.”

The story of Gates’ purchase was featured in publications as diverse as the Daily Mail, International Business Trade and a slew of media aggregating websites.