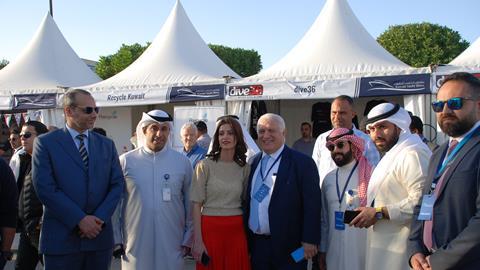 The Kuwait market is said to be performing well

The seventh edition of the Kuwait Yacht Show, organised by PH7 Events and held at Marina Crescent, came to a close on Saturday. Exhibitors that IBI spoke to were very satisfied with the outcome of the five-day event. The results reveal that the Kuwait market is performing well, despite slower business in other Gulf boating markets such as the UAE, Qatar and Oman.

“We have a huge market here and the Kuwaiti customers are very informed boaters,” he said. “When they come to visit us at the show they are asking many technical questions. This year we exhibited three new models – the Nomad 95, Oryx 379 and Silvercat 34 – and we are very satisfied with the serious enquiries we have received.”

One prominent overseas exhibitor was Sunseeker, represented by IMG Boats from Dubai with four boats. General manager Mohammed Al Jasmi told IBI: “Kuwait is the largest single boating market in the Middle East. At the same time, it is a very liquid market. Customers are always willing to understand a deal, and if the numbers are right, they won’t delay in making a decision. This is why the Kuwait Yacht Show is one of the fastest-growing shows in the region.

“Being a privately organised show, there is a lot of motivation by the organisers to create a good event,” he added. “This year we have seen visitors from other Gulf countries, which is an encouraging sign that this show is developing.”

Ahmad Al Ameeri from Seas and Deserts, a regional distributor for Azimut and a dealer for Sea Ray and Boston Whaler, exhibited 15 boats, including 10 Azimuts. “The market in Kuwait is good with new marinas now available and in build in the south of Kuwait that will add over 1,500 new berths. Some 400 of these are already built.”

Exalto Marine, an equipment distributor based in the UAE, has been active in the Kuwait market for many years. “Almost everyone has a boat by his house on a trailer or in a marina,” Exalto general manager John Paul explained. “There is a very high population of leisure boats, I think the highest in the Gulf with about 17,000 boats. There is a real tradition of boating, lots of fishing and going to the islands, more than you see in other Gulf countries.

“For us, Kuwait is an important market, and the boat and equipment dealers are well equipped. Kuwait is a growing market and despite the general downturn in the Gulf economies, the dealers are actually selling boats. I have spoken to many of the dealers at the show and they are very positive about the future. The show is well organised and overall a good seventh edition.”

Nouf H Al Hajeri, managing partner for the Kuwait Yacht Show, told IBI: “The show is going great and our exhibitors are pleased with how the show has grown. We have 35 boats on the water, more small boats on the land with a total of 82 exhibitors, we are seeing a lot of young people and millennials.

“For the future, we are focusing on raising the profile of the show regionally and internationally. This year we have exhibitors and visitors from across the region, as well as international companies such as Sunseeker, Azimut and Princess. The marinas are expanding in Kuwait, which takes away the issue of berth shortages which we have had in the past.”

Kuwait has few boatbuilders and only one, Gulf Master, exhibited at this year’s show. Gulf Master is a long-established Kuwait manufacturer that has been building boats of up to 40ft since 1994. The company exhibited several models at the show. “We are very happy at the way the show has grown over the years and the interest we have had at the show from existing and new customers,” said Gulf Master owner Issam Al Gharabally.

The Kuwait market will be covered in more detail in the next issue of IBI magazine.