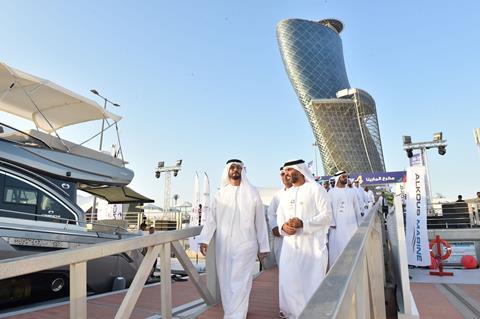 Humaid Matar Al Dhaheri, group CEO of ADNEC, said: “The remarkable growth achieved by ADIBS 2019 is the outcome of ADNEC’s sustained efforts to promote its new events and enhance their competitive advantages regionally and internationally. This success is evident from the 29% increase in the show’s total exhibition space that surged to 40,000sq m this year, as well as the 5% growth in the number of companies and exhibitors with participation of exhibitors from 27 countries.

“The event offers us the perfect opportunity to highlight ADNEC, Abu Dhabi’s state-of-the-art exhibition and conference venue, and its infrastructure, which is capable of hosting leading local, regional and international events that will support the emirate’s growing status as a destination of choice in the business tourism sector.”

The show has a strong local manufacturing presence by UAE-based companies in the leisure marine industry with a dedicated pavilion for hosting the UAE national companies to showcase their latest offerings.

Speaking to IBI at the show, ASM owner Mohammed Al Suwaidi said: “We are very happy to be the gold sponsor for the show for the second year running and look forward to our continuing co-operation as I feel the show is here to stay. I think the show will develop to be one of the leading boat shows in the Middle East region attracting international visitors and exhibitors.

“We are displaying two new boats, 25ft and 31ft models, as well as our existing 34ft and 42ft models for the leisure targeted at the Middle East and United States markets. We are also exhibiting a 46ft fast passenger boat for the Middle East and Africa. The show has improved this year and I’m very happy with the organisation and visitor attendance.”

A leading exhibitor in terms of innovation at the show is UAE-based ENATA, which is showing the latest pre-production version of its ‘Foiler’ which claims to be the world’s first production fully foiling yacht.

Speaking to IBI at the show, company director Alois Vieujot said: “We have done a lot of development of the original foiler design, including changing the propulsion system to hydraulic using twin 370hp diesel engines to power the hydraulic drives. To date we have had five orders and many more enquiries to follow up with lots of interest from Europe and the USA, especially from superyacht owners.”

The four-day show in Abu Dhabi, being attended by IBI, concludes on Saturday 19 October. A final news story on the show will be published by IBI next week.