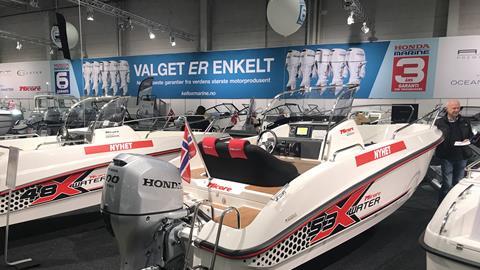 Also dealers and producers of bigger boats, such as Viknes, Skilsö and Fairline, saw good interest together with exhibitors of both electronics and clothes.

“The Oslo Boat Show SFA ended on a positive upbeat note for Askeladden as well as for most exhibitors with both attendance and retail sales up from previous year”, says Henrik Askvik, CEO Askeladden.

“The same market trends were observed in Oslo as in earlier boat shows in Gothenburg, Helsinki and Stockholm with outboard boats in the segment 8–10 meter showing significant growth.”

“More mature volume segments for center consoles, bow riders, day cruisers and pilothouse boats (6-8m), which has made up the bulk of the boat market for many years in the Nordic countries, are performing along the lines of previous years.”

In all the Oslo show (Sjøen for Alle) had around 300 boats and 200 exhibitors on display.