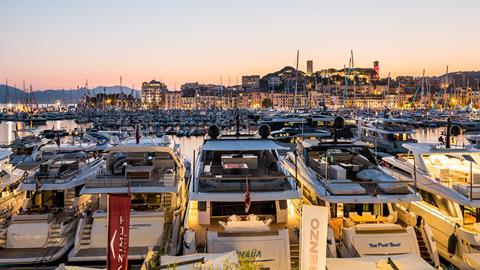 The 2018 Cannes Yachting Festival (CYF2018), its 41st edition, was described by a number of exhibitors as “the best of recent years”. However, the announcement of plans to move the sailing yachts and multihulls to Port Pierre Canto for 2019 has generated mixed opinions.

CYF 2018 appears to have been very successful, with most exhibitors spoken to by IBI reporting that they had either signed up business or had strong leads to follow up after the show. Leading players such as Azimut-Benetti, the Ferretti Group and Sanlorenzo, to name just three, said that sales were achieved.

While visitor numbers have not yet been released, the combination of six days of good weather and over 200 new boats on show means they are likely to be higher than in 2017.

While motor craft dominated, there were 110 sailing yachts accounting for 17% of the total, including 46 multihulls, of which 13 were motor-powered.

Port Pierre Canto as usual hosted the brokerage yachts for sale or charter, with 46 yachts up to around 50m on display. Most of the brokers spoken to by IBI were pleased with the results, with comments such as: “The added efforts that the organisers have put into the shuttles have paid off very well.”

Several brokers received offers on superyachts for sale, plus some sign-ups for charters.

This year Port Canto also hosted the toys side of the show as a lead-in to the much larger change that will be made in 2019, with all sailing yachts and multihulls moving to this side of the bay. This change followed a major review of the show layout initiated last year in response to meeting the growing number of yachts wanting to be exhibited and the growing shortage of space at the Vieux Port.

Under the new arrangement, the Vieux Port will be completely dedicated to motorboats and yachts and Port Canto will have the brokerage yachts, sailing monohulls, multihulls and toys. To cope with this, the free shuttle services will be increased.

The reaction from exhibitors, especially from those with both motor and sailing yachts, was mixed as they expect increases in costs and personnel needs to meet the needs of the change. However, it has been known for some time that something needed to be done, thanks to the results of the organisers’ study and consultations with exhibitors.