Initiative to start new era of yachting in China

Clipper Ventures, the British organiser of the Clipper Round the World Yacht Race, is undertaking its biggest expansion in 23 years with the establishment of a new China-based division. The aim of this new arm is to support the growing participation in sailing in China.

Co-founded by Sir Robin Knox-Johnston and William Ward, Clipper Venture’s new division is called Clipper China. The division aims to become the industry leader in the development of offshore sail training and sailing events across China.

In addition to running its own academies, Clipper China is building its own one-design keelboats and offshore racing yacht fleets. Designed by British naval architect Tony Castro Design, the fleets will be used in the new training academies and also compete in regattas. 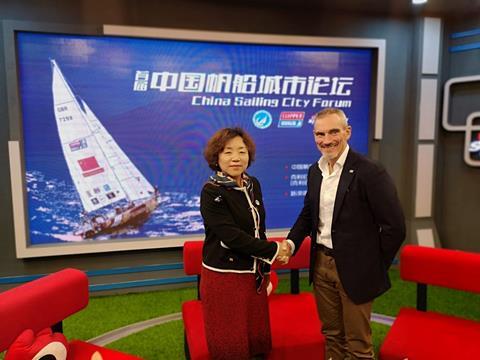 Announcing the news at the first China Sailing Cities Forum in Beijing, Clipper Ventures CEO William Ward said: “Clipper Ventures is the biggest single provider of offshore sail training in the world. We have trained over 5,000 sailors to participate in the Clipper Round the World Yacht Race over the past two decades, however the potential for sailing in China means it could take us just a couple of years to train the same number here.”

He added: “Interest in sailing in China has never been higher. China has featured on the Clipper Race route for the past 14 years and we have signed two additional teams here in the past two years. Out of over 40 nationalities of crew on the Clipper Race, China is now our third highest represented. The Chinese sailing industry is evolving in an exciting way, and we look forward to working further with the China Yachting Association (CYA), combining forces to bring our offshore sail training expertise to this growing industry.”

Clipper China aims to open its first offshore racing academy next year and the first yachts in its one-design fleets are expected to be on the water for testing in spring 2019.

The creation of Clipper China follows the meeting earlier this year between Clipper Ventures, the GREAT Britain campaign, the CYA and the RYA, during the Clipper 2017-18 Race’s stopover in Qingdao, where all parties committed to help make China a world sailing force by strengthening the ties between China and the UK.

Explaining the rise in interest in sailing participation in China, Madam Zhang Xiaodong, president of the China Yachting Association, commented: “The Clipper Race is the most well-known offshore sailing brand in China with the UK respected for its long-standing sailing heritage. We are in a strong position to help attract and develop our next generation of sailors.

“Sailing,” she continued, “has been growing at a very fast pace in recent years and the local public has participated in and supported more water sport activities than ever before. In comparison to the few regattas held a decade ago, there are now over 100 regattas across the country every year. The CYA expects to see over 400 yacht clubs with more than 150,000 sailing participants by 2021, an increase of 150% on the current level.