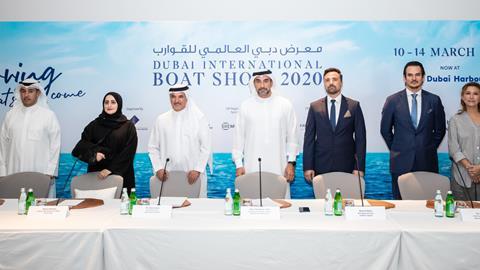 Dubai show to go ahead next month as planned

The 28th Dubai International Boat Show (DIBS) is to go ahead next month as planned at the new Dubai Harbour Marina. The show’s organisers announced today that it will take place from March 10-14, 2020.

Although almost all boat shows in Asia further east of Dubai have been impacted by the effects of the novel coronavirus, the Dubai event is confirmed by the organisers to be taking place as scheduled. The total number of people infected by the virus in Dubai is listed as nine, although three have since fully recovered from the virus.

Dubai appears to be able to handle the issue well. According to a report in the Gulf News: “A recent study by Germany’s Humboldt University and Robert Koch Institute to identify the relative import risk showed a relatively low level for Dubai. The study computed a list of countries at risk of importing the virus after analysing air traffic patterns connecting 4,000 airports worldwide – with over 25,000 direct connections between them, Dubai came low on the list in the 19th spot among a total of 30 countries at risk of importing the virus.”

According to details released by the organisers:

“This show takes on even greater significance as Dubai enters the final preparations for Expo 2020 Dubai. The world’s greatest show will serve to underline Dubai’s standing as a global innovator.”

Selcuk Balci, managing director of D-Marin Dubai, which is developing Dubai Harbour, said: “It’s an honour for D-Marin Dubai to be working on the marina at Dubai Harbour. The exclusive marina will be one of the few marinas in the world to offer superyacht owners an advanced home-port solution.”

DIBS will have a sizable number of superyacht builders. According to the organisers: “DIBS 2020 is set to host its most impressive iteration of the Superyacht Avenue to date. Organised with the Superyacht Builders Association (SYBAss), the Superyacht Avenue will unite the industry’s most respected names such as Benetti, CRN Yachts, Feadship, Fincantieri, Heesen, Lürssen, Oceanco and Sanlorenzo. Local superyacht builder Gulf Craft will also be present and has been a partner of DIBS since its inception. They will showcase the latest Majesty 120, a 37m vessel that will enjoy its regional launch alongside a new addition to the Nomad range.”

Abeer M Alshaali, acting CEO of Gulf Craft, said: “Dubai International Boat Show is one of the most important regional shows in the international yachting sector. For Gulf Craft, year after year, the show serves as a catalyst for client networking, and we expect that to continue in 2020. This region has a great potential for growth within the marine industry, as Dubai continues to grow its leisure sector and as regulations advance to make the city more accessible than ever.”

IBI’s Middle East and Asia correspondent will be reporting from next month’s DIBS.